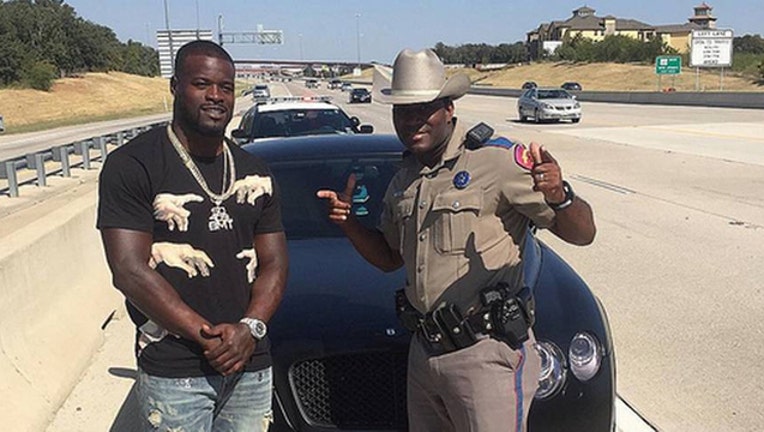 DALLAS (AP) — A Texas trooper faces a procedural review for having his photo taken with Dallas running back Christine Michael during a traffic stop hours before a Cowboys game, the Department of Public Safety said Tuesday.

Stephen Lister, a trooper for 6½ years, stopped a southbound black Bentley on a Dallas-area turnpike around noon CDT Sunday because the car appeared to violate window tint laws, the agency said. The driver, later identified as Michael, discussed the tint with the trooper. No citation was issued.

"The trooper had Mr. Michael step out of the vehicle for a picture, and the driver left the scene," the DPS statement said. A passenger in the player's car took the photo, according to Sgt. Lonny Haschel.

Michael later posted the photo on Instagram with the caption: "Got stopped just to take a picture."

The photo shows Michael, wearing jeans and a shirt, with his hands folded in front of him, and the uniformed Lister, whose hands are both up and pointing, like pistols. The photo was taken in front of Michael's luxury car, with a patrol car seen parked behind the Bentley.

Lister, in later conversations with "his chain of command," realized his error in judgment and was apologetic for the incident, Haschel said.

"The trooper's actions have been reviewed by DPS and are not consistent with department procedure," the DPS statement said. "Corrective action, in the form of a procedural review, will be taken."

DPS did not elaborate. The Cowboys declined comment Tuesday.

After the traffic stop, Michael traveled to nearby Arlington to play in the Cowboys' 30-6 loss to New England. He had one carry for six yards.