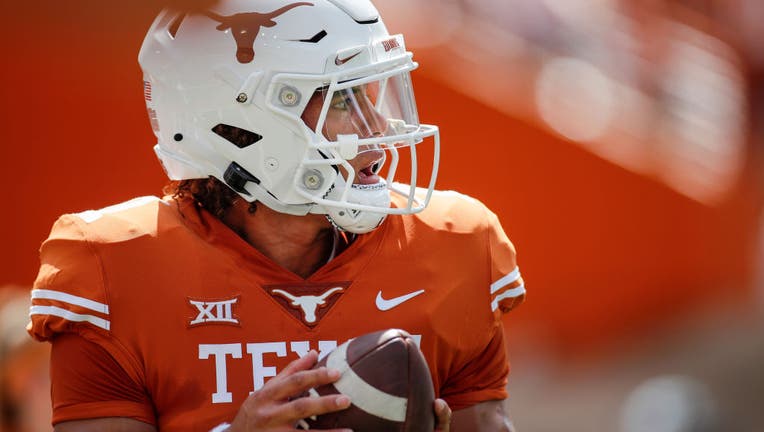 AUSTIN, TEXAS - SEPTEMBER 04: Casey Thompson #11 of the Texas Longhorns warms up before the game against the Louisiana Ragin' Cajuns at Darrell K Royal-Texas Memorial Stadium on September 04, 2021 in Austin, Texas. (Photo by Tim Warner/Getty Images)

AUSTIN, Texas - Texas coach Steve Sarkisian said Monday that Casey Thompson will start at quarterback against Rice this weekend after an inconsistent performance by Hudson Card in a 40-21 loss to Arkansas over the weekend.

Card, a redshirt freshman, will see time against the Owls.

"I think it’ll be good for Hudson to take a little bit of a deep breath coming off of last week’s game," Sarkisian said. "The bottom line, it’s not about how you execute every play, it’s about you maneuvering the offense down the field to score points. I think Casey has put himself in a good position to do that."

The Razorbacks led 16-0 at halftime Saturday night as Texas was dominated from the beginning. The Longhorns (1-1) punted on six of their first seven drives. Their seventh resulted in a missed field goal.

Sarkisian, in his first year coaching the Longhorns, said Card was moving around too much, too early.

"We weren’t great protecting him early on in the game, but I thought he was a little antsy and we missed some opportunities," he said.

Card was pulled on the final drive of the third quarter with Texas trailing 33-7. Thompson led two Longhorns scoring drives in the fourth quarter, both capped by his rushing touchdowns.