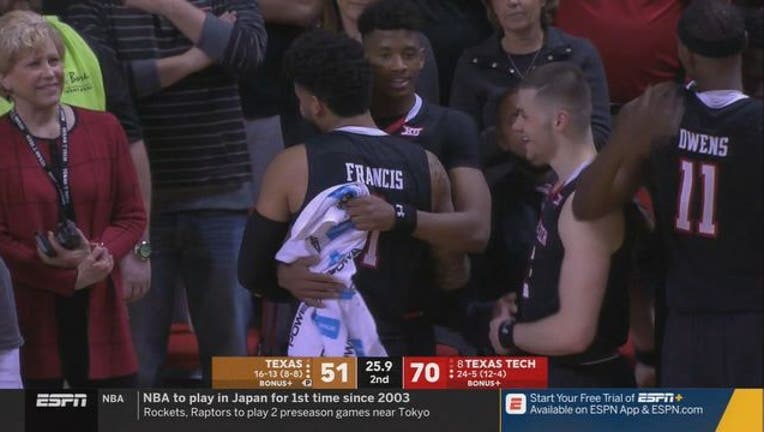 LUBBOCK, Texas (AP) - Jarrett Culver scored 16 points, Matt Mooney added 15 and No. 8 Texas Tech stayed even with Kansas State atop the Big 12 with one game remaining in a dominating 70-51 win over Texas on Monday night.

With his mom watching from the stands after traveling from the Dominican Republic on senior night, Brandone Francis scored all 12 of his points in the second half in an eighth straight win for the Red Raiders (25-5, 13-4 Big 12).

No. 18 Kansas State rolled to a 64-52 win at TCU on Monday, so the Wildcats and Red Raiders have a shot at the Big 12 regular-season title Saturday. Kansas State is home against Oklahoma, and Texas Tech visits Iowa State.

The Big 12 co-leaders also left 13th-ranked Kansas' streak of 14 consecutive conference titles in jeopardy. The streak could end with a KU loss at Oklahoma on Tuesday night or a win by either Kansas State or Texas Tech this weekend.

Matt Coleman led the Longhorns (16-14, 8-9) with 16 points, but Texas struggled all night to get in sync on offense and finished shooting 30 percent.

On senior night in his hometown of Lubbock, Culver, a sophomore, turned in a solid performance in what may have been his final home game. Projected as an NBA lottery pick, Culver scored 12 points after halftime, including a 3-pointer for Texas Tech's first 20-point lead.

With two-time NBA defensive player of the year Dennis Rodman watching with a capacity crowd, the Texas Tech defense was as suffocating as usual. The Longhorns were 8 of 27 from the field in each half.

Texas: A roller-coaster season continues for the Longhorns, who were coming off a win over Iowa State that dramatically improved their NCAA Tournament hopes.

Texas Tech: The Raiders remained the hottest team in the Big 12 and one of the hottest in the country, with a 10th win in the last 11 games.

Texas: The Longhorns finish the regular season at home vs. TCU on Saturday.

Texas Tech: The visit to Iowa State gives the Red Raiders a chance to avenge their only home loss of the season.