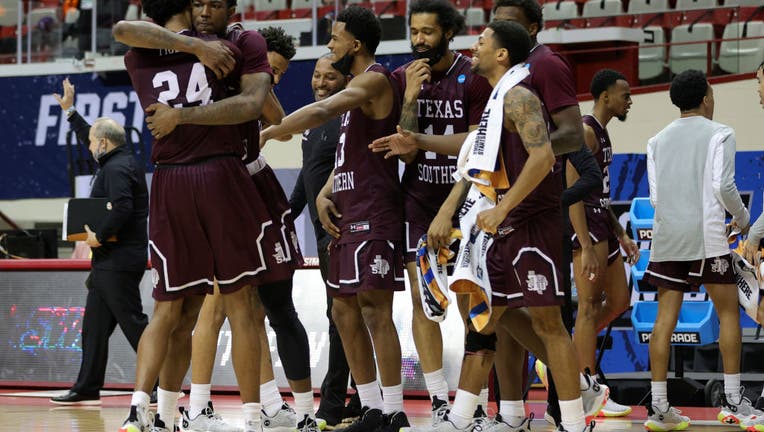 It's the second straight First Four victory for the Tigers (17-8), who also won in 2018 — their most recent tournament appearance. Texas Southern, the No. 16 seed in the East Region, won its 10th straight game and faces top-seeded Michigan (20-4) on Saturday.

Damian Chong Qui scored 14 points and Mezie Offurum had 10 points and 16 rebounds for the Mountaineers (12-11), who fell to 1-9 in tourney play.

It was the first NCAA Tournament game since Virginia beat Texas Tech in overtime to win the national championship on April 8, 2019 — a span of 710 days. And the atmosphere inside Indiana University's Assembly Hall was alien to the event known as March Madness. Only players, coaches and staff members were permitted on the court level and an estimated 150 people sat in the cavernous lower bowl.

It didn't take long for Texas Southern to change the game after trailing 30-20 at the half.

Walker and Gilliam scored the first 11 points to give the Tigers a 31-30 lead. The Tigers started pulling away with a 12-4 spurt that made it 46-42 with 8:10 to play and finally put the game away at the free-throw line.

Mount St. Mary's: The Mountaineers beat the two top seeds in the Northeastern Conference Tournament to make the 68-team field. They made a gallant effort Thursday before coming up short.

Texas Southern: Coach Johnny Jones now has first tourney win with the Tigers and just the third ever by a Southwestern Athletic Conference champion. While Texas Southern found a way to advance, it needs to play much better to compete with the Wolverines.

Mount St. Mary's: Positive COVID-19 tests forced the Mountaineers to put the program on pause twice in December, forcing them into a monthlong break between games. Five games were postponed or canceled from Dec. 9-Jan. 6 and they didn't play a home game for 37 days.

Texas Southern: The Tigers started this season by playing four games in nine days and closed it by playing 10 games in 20 days because of make-up dates. They also were forced to play on the road after March 4 because their home court suffered water damage during a winter storm.