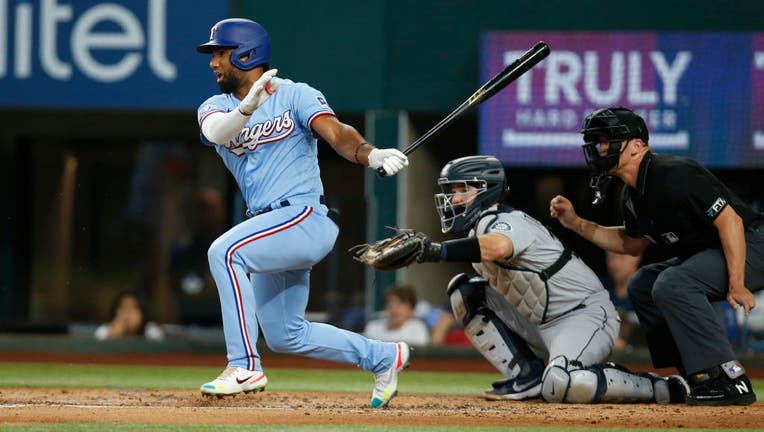 ARLINGTON, TEXAS - JUNE 05: Ezequiel Duran #70 of the Texas Rangers singles for his first major league hit in the second inning against the Seattle Mariners at Globe Life Field on June 05, 2022 in Arlington, Texas. (Photo by Tim Heitman/Getty Images)

ARLINGTON, Texas (AP) - Abraham Toro scored on a wild pitch by Brock Burke in the 10th inning to complete Seattle's late-game rally and beating the Texas Rangers 6-5 on Sunday.

Seattle cored three in the ninth off Matt Bush, who had his third blown save this season, to tie the score 5-5. Then Toro, an automatic runner, advanced to third base on a groundout by Dylan Moore and scored on ball four to Adam Frazier from Burke (3-1).

Eugenio Suarez had four RBIs for the Mariners, including a solo home run on the first pitch of the fourth inning.

Texas' five runs were scored on home runs -- including the first major-league homer for rookie Ezequiel Duran, who was recalled from Double-A Frisco before making his big-league debut on Saturday. Duran singled in the second inning for his first hit in the majors.

Texas starter Martin Perez came in leading the major leagues with a 1.42 ERA. He allowed two runs, raising his ERA to 1.56. The New York Yankees' Nestor Cortes took over the big-league lead (1.50).

It was Garcia's fourth homer in his last eight games and Semien's third in his last nine games after beginning his first Texas season with 43 homerless games.

Semien hit 45 homers last season with Toronto, the most ever by a primary second baseman in the major leagues.

Suarez's first-pitch homer leading off the fourth inning ended a 69 1/3-inning homerless streak for Perez that began after the Yankees' Gleyber Torres homered off him last Sept. 24 when he pitched for Boston.

Mariners: LHP Ryan Borucki was in uniform for the Mariners for the first time after being acquired Saturday from Toronto for minor league INF Tyler Keenan. ... INF Mike Ford was designated for assignment to make room for Borucki on the 40-man roster.

Rangers: LF Steele Walker made his major league debut and went 0 for 4 after being promoted from Triple-A Round Rock. ... INF Andy Ibanez was optioned to Round Rock, and Round Rock OF-DH Willie Calhoun was designated for assignment to make room for Walker on Texas' 40-man roster.