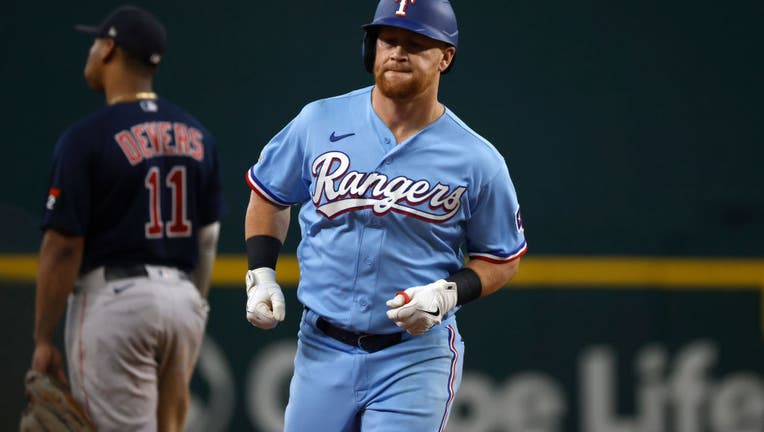 ARLINGTON, TX - MAY 15: Kole Calhoun #56 of the Texas Rangers runs the bases after hitting a solo home run against the Boston Red Sox during the sixth inning at Globe Life Field on May 15, 2022 in Arlington, Texas. (Photo by Ron Jenkins/Getty Images)

Texas trailed 1-0 and didn't have a hit until Calhoun led off the bottom of the fifth with an opposite-field homer into the visitors' bullpen in left-center.

Garcia broke the 1-1 tie with two out and two men on base in the sixth. He hit an 0-1 pitch from Boston's Ryan Brasier, took 10 steps down the first base line while watching the ball disappear into the right-center field bullpen, dropped his bat and broke into a trot.

Two pitches later, Calhoun sent another homer the other way.

Garcia added a two-run homer in the eighth to tie his career high with five RBIs.

The home runs were the first for Texas in the three-game series. The Red Sox won the first two against the Rangers but haven't won more than two in a row this season.

Perez (2-2) allowed five hits and struck out seven. He has an ERA of 0.84 over his five most recent starts.

Perez held the Red Sox scoreless until two were out in the top of the fifth inning. Kike Hernandez looped a single into right-center field, and Rafael Devers sent Hernandez home with a one-hop double off the center field fence.

Devers, Perez's teammate with Boston in 2020 and '21, had three of the five hits allowed by the left-hander -- two doubles and a single.

Marcus Semien ended his 0-for-27 drought with a double down the left-field line in the Rangers' four-run sixth inning.

Rangers: C Mitch Garver (elbow) has been hitting for two days. Garver is eligible to come off the injured list Thursday and could return at DH or at first base, manager Chris Woodward said.

It took five pitches for Boston's J.D. Martinez to extend his major league-leading hitting streak to 16 games and on-base streak to 32 with a first-inning single. The on-base streak carried over from his last five games of 2021. The previous Red Sox player to reach base in the first 27 games of a season was Hall of Famer Wade Boggs in 1983.

LHP Austin Davis became the seventh Red Sox pitcher to start a game this season. As the opener ahead of RHP Tanner Houck, Davis made his first major league start after 98 relief appearances. He retired the first six batters he faced and left the game after allowing a leadoff walk to Nathaniel Lowe in the third inning. Houck has made four starts this season.