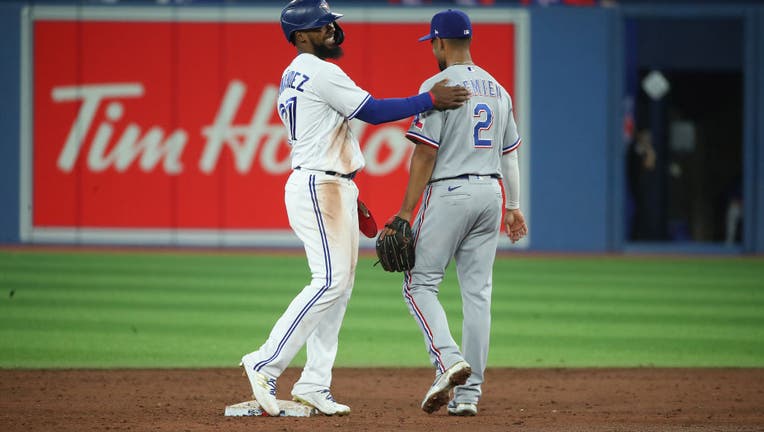 George Springer and Vladimir Guerrero Jr. each had two hits, and Bichette scored twice as the Blue Jays improved to 2-0 for the first time since 2016.

Facing left-hander Brett Martin (0-1), Espinal hit for Cavan Biggio with a runner at first and two out. Speedy Raimel Tapia scored without a play at the plate on Espinal's double to left-center.

Blue Jays right-hander Trevor Richards (1-0) worked one inning for the win. Yimi Garcia pitched the seventh, Tim Mayza worked the eighth, and Jordan Romano finished for his second save.

All three runs off Gausman came in the third. Former Blue Jays infielder Marcus Semien hit an RBI double, Corey Seager followed with a run-scoring grounder, and Nathaniel Lowe capped the rally with an RBI single.

Guerrero and Lourdes Gurriel Jr. drove in runs for Toronto in a two-run first against right-hander Dane Dunning, and the Blue Jays tied it on Bichette's first homer this season, a leadoff drive in the fifth,.

Blue Jays OF Teoscar Hernandez was hit by pitches in the third and seventh innings.

Blue Jays LHP Hyun Jin Ryu (14-10, 4.37 in 2021) starts Sunday as Toronto goes for the sweep. Ryu went 1-1 in two starts against Texas last season, the only times in his career he has faced them. The Rangers have not announced a starter.