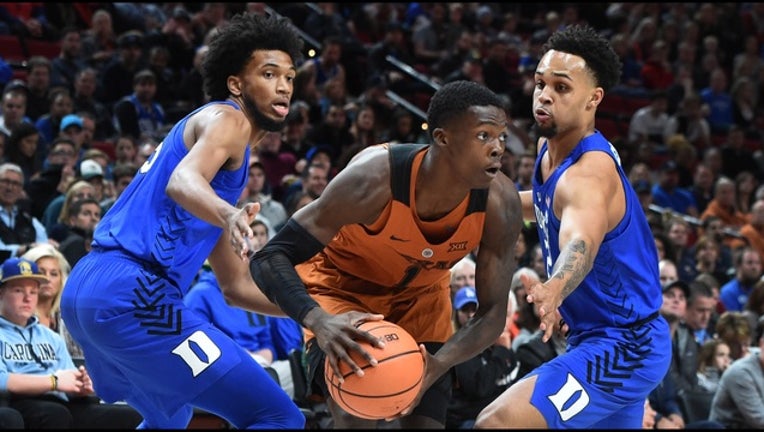 Marvin Bagley III and Gary Trent Jr of Duke trap Andrew Jones of Texas during the first half of the game during the PK80-Phil Knight Invitational at the Moda Center on November 24, 2017 in Portland, Oregon. (Photo by Steve Dykes/Getty Images)

AUSTIN, Texas (AP) - Texas sophomore guard Andrew Jones has been released from the hospital and will continue his leukemia treatment on an outpatient basis.

In a statement released by the school, Jones said he left the MD Anderson Cancer Center in Houston on Saturday, a move he called a "great night and a big step for me and my family."

Jones said he's encouraged by reports from doctors telling him he's showing improvement. He will stay in the Houston area for his outpatient treatments.

Texas announced on Jan. 10 that Jones had been diagnosed with leukemia.

Jones had considered leaving Texas for the NBA after his freshman season but returned to the Longhorns. He was the team's leading scorer early in the season before a wrist fracture kept him out of several games. He returned in late December but complained of having low energy before doctors diagnosed leukemia, which is a form of blood cancer.