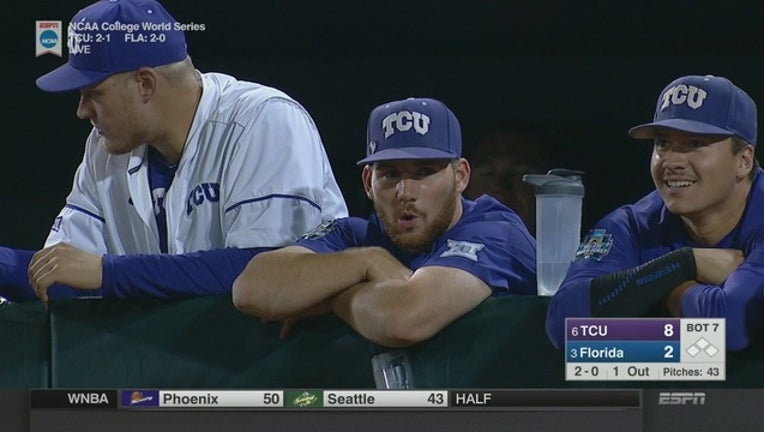 "Jackson, on their side, was beyond amazing," Schlossnagle said. "I started to think after he was punching us out so much in the first two-plus innings if there ever has been a 20-strikeout game in the World Series."

The answer is yes. But none of that mattered once the Frogs started catching on to Kowar (12-1) the second time through the order. He was gone by the sixth inning, and the Frogs were well on their way to a 9-2 win that forced a second Bracket 2 final on Saturday night. The winner of that game goes to the best-of-three finals starting Monday.

Skoug delivered the big blow for the Frogs, breaking a 2-for-13 mini-slump in the sixth with a bases-clearing double off reliever Frank Rubio for an 8-2 lead.

Charles King (1-3) pitched 3 1/3 innings of one-hit shutout relief after taking over for starter Mitchell Traver with two outs in the fourth. King, a freshman who was pitching for the first time since May 27, struck out Nick Horvath with the bases loaded to end the inning and retired nine of the next 11 batters.

"Charles came through with just enough strikes," Schlossnagle said. "They're an aggressive-swinging team and we made plays behind him."

Florida (49-19) got an 11-strikeout performance from ace Alex Faedo in a 3-0 win over TCU in its CWS opener Sunday, and he'll be on the mound again Saturday night. Tyler Dyson and star closer Michael Byrne are available in the bullpen.

"If you told me we had one game to win and you've got Faedo on the mound and Dyson, who's emerged, and Byrne fresh, I'll take my chances," Gators coach Kevin O'Sullivan said. "Nothing we can do about tonight. It got away from us."

The Horned Frogs (50-17) led 2-0 in the third after Ryan Merrill's single and back-to-back doubles by Austen Wade and Zach Humphreys. The Gators tied it in the bottom half, but Josh Watson's two-run triple in the fourth gave TCU a 4-2 lead.

Wade made it 5-3 with an RBI grounder off Rubio before Skoug broke open the game with his three-run double.

Skoug said it was a matter of time before the Frogs, who scored seven of their runs with two outs, broke through against Kowar.

"He had us aced up for a while," Skoug said. "Our scouting report didn't show how good his changeup was, and for us left-handers that changeup put us away. He mixed his pitches. But as long as you see a guy a couple times ... We had some timely hitting with two strikes and that helped us."

O'Sullivan's biggest concern is his offense's lack of production. The Gators are hitting .200 with 10 runs through three games in Omaha. Leadoff batter Ryan Larson is 0 for 11 and JJ Schwarz, the 3-hole hitter, and Jonathan India both are 1 for 12.

"Probably need to look at the lineup a little tomorrow," O'Sullivan said. "I hate to make a change this late in the season. But there's some guys that are obviously not feeling great about themselves right now, and maybe I can take pressure off them by moving them down a little bit."

Garrett Milchin, who took over for Kowar starting the sixth, removed himself in the middle of facing his fourth batter because of right forearm tightness. O'Sullivan said Milchin won't be available Saturday.

TCU's Cam Warner didn't mean to, but he moved a couple runners up a base when he backed away from Kowar's inside fastball in the fifth inning. Warner's bat went parallel to the ground and the ball hit the bottom of the knob. Kowar threw him out at first.

Florida walked three batters in its first 21 innings at the CWS. The Gators walked six from the fourth through eighth innings against TCU.