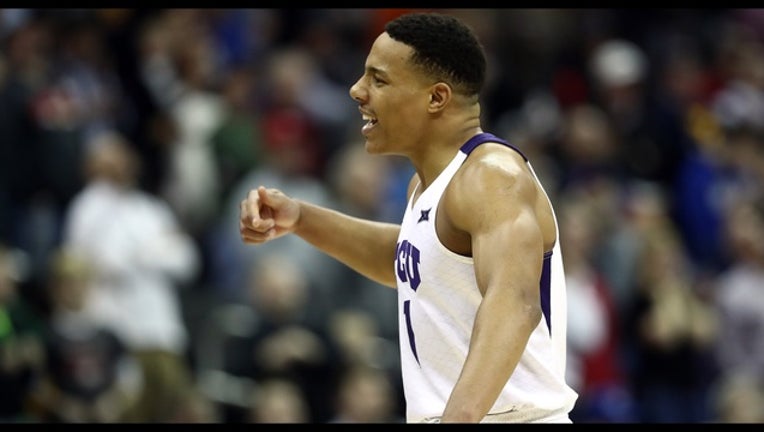 Desmond Bane #1 of TCU celebrates as the Horned Frogs defeat Oklahoma State during the first round game of the Big 12 Basketball Tournament at the Sprint Center on March 13, 2019 in Kansas City, Missouri. (Photo by Jamie Squire/Getty Images)

KANSAS CITY, Mo. (AP) - After blowing a 21-point lead in the second half, Desmond Bane hit a 3-pointer from the corner in the closing seconds to give TCU a 73-70 win over Oklahoma State on Wednesday night in the first round of the Big 12 Tournament.

The Horned Frogs fought off a late comeback by the Cowboys, who outscored TCU 41-28 in the second half. Oklahoma State led by one with one minute to go, but it wasn't enough in the three-point loss.

"I was not surprised they made a run," TCU coach Jamie Dixon said. "I felt I could have done a better job coaching offensively, but we're not perfect."

Lindy Waters and Yor Anei had 17 points apiece for Oklahoma State (12-20). Anei also had seven blocks, which set a program record for a Big 12 Tournament game.

"It just felt normal to me," Anei said. "I was trying to block everything that came to the rim and I was trying to get stops for our team in order to win."

Oklahoma State took the lead after Waters made a couple free throws. On the ensuing position, Bane hit a 3 and the Horned Frogs closed it out with two free throws after a missed jumper by Waters.

"We've been here before, as far as keeping our composure," Bane said. "We've got a lot of guys that have played a lot of those games . I was open and just shot it."

Thomas Dziagwa added 12 points for the Cowboys. Cameron McGriff and Isaac Likekele chipped in with 10.

The Horned Frogs looked like a team playing for their NCAA Tournament lives at the start as they jumped out to a 27-11 lead. Noi hit two 3-pointers and Samuel had three dunks in the first 10 minutes.

"We made a really good comeback," Oklahoma State coach Mike Boynton said. "So I'm proud of our guys for not giving in because they could've."

TCU: If the Horned Frogs wanted to make the tournament, they had to win this game. They took care of business and if they can beat Kansas State on Thursday, they will feel very good about making the field of 68.

Oklahoma State: Finished the year winning two of their final three games, but will probably be one of two teams in the conference not in postseason play.

TCU will prepare for Big 12 co-regular season champion Kansas State, who will most likely be playing without Big 12 First-Teamer Dean Wade.

"We're going to prepare for them like we do any other team," Robinson said. "They beat us twice already this year so we need to come out and play hard."

TCU takes on No. 1 seed Kansas State on Thursday.

Oklahoma State's season is likely over.