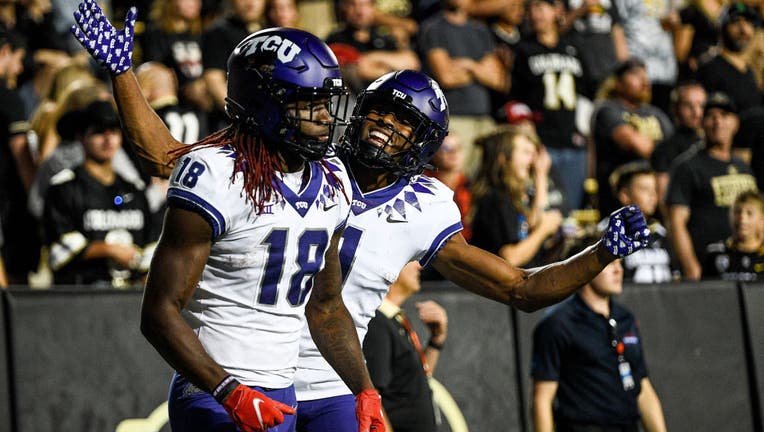 BOULDER, Colo. (AP) - Derius Davis scored on a 60-yard punt return and a 27-yard reverse to help TCU open the Sonny Dykes era with a 38-13 win over Colorado on Friday night.

Dykes took over for longtime TCU coach Gary Patterson after spending the last four seasons at SMU, where he revived the program.

Maybe it was the delayed start — about 35 minutes due to lightning in the area — but the Horned Frogs couldn’t get much going early. Once they did, the Buffaloes couldn’t stop their speed. The Horned Frogs outscored Colorado 31-7 after halftime to turn a close game into a rout.

"It was good for us to not have everything go our way early on," Dykes said. "We showed some grit and never blinked."

The Buffaloes entered the game on their home turf as a 13 1/2-point underdog, according to FanDuel Sportsbook.

"I’m confident that we can get it fixed because I know we’re a better team than what we did and what we played like today," Colorado coach Karl Dorrell said. "We’re better than that. But I’ve got to stop talking about it. We’ve got to get better."

Davis ignited a sluggish TCU squad early in the second quarter by fielding a punt, finding room around the edge and sprinting down the sideline for his fourth career punt-return touchdown. That ties KaVontae Turpin for the most in school history.

Davis scored in the fourth quarter on a trick play to make it 31-6 and seal the win.

"I just take every play as an important play," Davis said. "That’s just how I am, the type of player I am."

Emari Demercado added a 43-yard touchdown run through the heart of the Colorado defense early in the third quarter.

TCU came away with points on all five of its second-half drives before a kneel-down to close out the game.

The Horned Frogs went with quarterback Chandler Morris over Max Duggan to start the game. Morris left late in the third quarter after a defender landed on his left leg. He had a towel over his head and ice on his knee as Duggan took over.

Duggan engineered a 10-play, 80-yard drive that culminated in a 3-yard TD run from Kendre Miller.

"Obviously winning is a lot of fun, and makes you feel good," Duggan said. "But there are things that we need improve on."

Dorrell went with incumbent QB Brendon Lewis over J.T. Shrout, the Tennessee transfer who missed all of last season after hurting his knee in Colorado's camp. Dorrell had seen improvement out of Lewis from last season to this moment and rewarded it.

Shrout got into the game late in the first half and his inaugural pass for the Buffaloes went for 35 yards. Lewis was back to start the second half before Shrout was inserted in the final quarter and threw a 23-yard TD pass to Jordyn Tyson with 1:13 remaining.

Dorrell will evaluate the position before making a decision.

"We’ll watch the tape. We’ll assess and get a chance to fix and address some things," Dorrell said. "But I will say for our fans, there’s jitters in everybody that first game coming back. Maybe it was too much pressure on him — who knows? But I’m confident that he’s a better player. I still feel he’s a better player than last year."

Colorado: The Buffaloes had three drives stall out at or inside the 25. It resulted in two fields goals and being stopped on downs.

Colorado captain Brady Russell wasn't pleased with the drooping heads when the Buffaloes fell behind 17-6 in the third quarter.

"I saw way too much defeat when we were still very, very much part of the game," the tight end said. "That’s why I’m so mad right now. We had too many people give up, and that’s not the team that we formed this offseason."

The Buffaloes honored the late Cliff Branch, who was recently inducted into the Pro Football Hall of Fame. Branch played two seasons at Colorado, where he excelled as a receiver and a returner. Branch was a fourth-round pick in the 1972 draft by the Raiders. He had 501 catches for 8,685 yards and 67 touchdowns over 14 seasons with the franchise.

Longtime Colorado sports information director David Plati worked his 500th game Friday for the Buffaloes football team. Plati, who’s in his 40th season as a full-time staff member at Colorado, will semi-retire in January. One of his roles will be the program’s historian.

Colorado: The Buffaloes play at Air Force on Sept. 10.