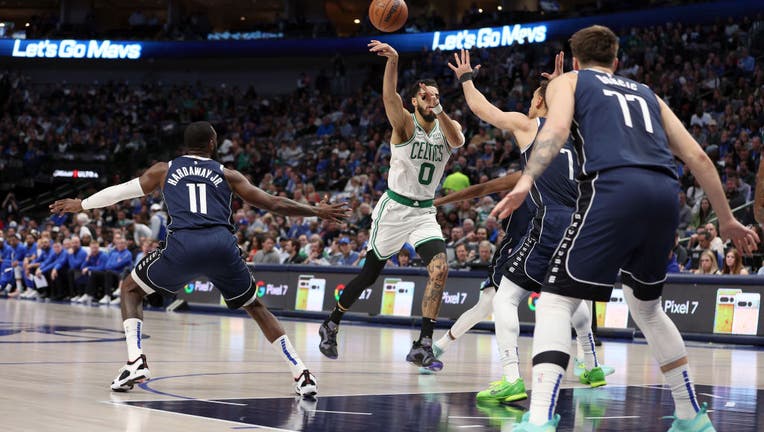 DALLAS - Jayson Tatum and the Celtics answered a head-scratching loss with the Boston star's second career triple-double in a blowout of Luka Doncic and the Mavericks.

Tatum had 29 points, 14 rebounds and 10 assists, and the Celtics ended Dallas' seven-game winning streak with a 124-95 victory Thursday night.

Jaylen Brown scored 19 points for the NBA-leading Celtics, who bounced back from a 150-117 loss in Oklahoma City when the Thunder were missing 30-point scorer Shai Gilgeous-Alexander.

"They showed me they can do it one time," interim coach Joe Mazzulla said. "They have to do it over and over again."

Luka Doncic scored 23 points after averaging 44.5 points the previous five games. The Mavs superstar didn't play in the fourth quarter, which started with Boston leading by 24.

Doncic hit buzzer-beating 3-pointers for the win in Boston's previous two Dallas visits. There was never a chance for a third, or for the Mavs to extend the longest winning streak since their lone championship season in 2010-11.

Doncic missed all six shots from long range as the Mavericks finished 7 of 32. Doncic was 7 of 23 overall and Dallas finished at 38% two nights after Oklahoma City shot 59% against the Celtics.

"When we're at our best, we play really good basketball on both ends of the floor with high effort for a long period of time," Mazzulla said. "And then we go through a couple of games where we lose that. What I love about tonight was we did bounce back."

Tatum wasn't much better than Doncic, going 8 of 22 from the field, but his teammates were. Boston shot 16 of 43 from 3, with eight players hitting at least one.

Marcus Smart and Malcolm Brogdon each scored 15 points, with Smart going 4 of 9 from deep while Brogdon was 3 of 5.

The Celtics never trailed after the middle of the first quarter, and Dallas didn't get closer than 13 after halftime. The Mavs were swept in the two-game season series after trailing big at halftime in a 125-112 loss at Boston.

"It was kind of like what happened in Boston," Mavs coach Jason Kidd said. "We just couldn’t score. We had some great looks there early. The ball just didn’t fall for us."

Grant Williams scored 10 of his 12 points in the first half, when the Boston bench outscored Dallas’ 27-2. Tatum and Brown took over from there, combining for 33 points after the break.

NO PASS, NO MAKE

Doncic had nine rebounds but was limited to three assists as the Mavs tied their season low in assists with 15. Spencer Dinwiddie scored 18 but was just 6 of 15 as the Dallas starters shot 32%.

Celtics: Seldom-used C/F Noah Vonleh was traded to San Antonio for a future conditional second-round pick. The Celtics included cash in the deal. Vonleh averaged 1.1 points, 2.1 rebounds and 7.4 minutes in 23 games. ... Smart was fined $35,000 for using inappropriate language with an official in the loss to the Thunder. Smart was assessed his second technical and ejected over the third-quarter incident.

Mavericks: G Josh Green (elbow) and F Dorian Finney-Smith (adductor strain) remain out but will travel on a five-game road trip that starts Sunday in Oklahoma City. ... Christian Wood had 12 points and 12 rebounds. ... Rookie Jaden Hardy scored all of his 15 points in the second half with the game out of reach.