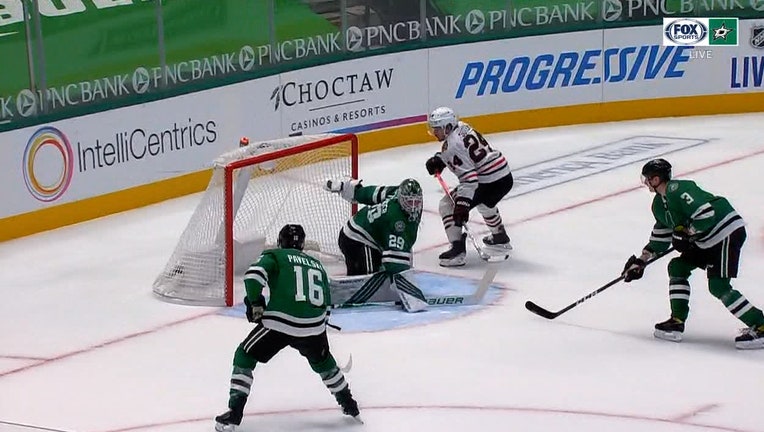 DALLAS - Pius Suter scored 2:15 into overtime Tuesday night to give the Chicago Blackhawks their second straight 2-1 win over the Dallas Stars in the extra period.

The rookie skated toward the net with a pass from Brandon Hagel and slid the puck beneath goalie Jake Oettinger to complete a comeback win.

Mattias Janmark also scored for Chicago, which is 6-1-4 in its last 11 games.

Roope Hintz scored for the Stars, who are 0-2-1 in their past three.

In a matchup of rookie goaltenders, Kevin Lankinen made 34 saves for the Blackhawks, and Oettinger stopped 27 shots.

Alex DeBrincat was the overtime hero for Chicago at 2:56 on Sunday afternoon with his second goal of the game.

Hintz scored his third of the season and second in three games when he collected a loose puck in the left circle, skated through the crease and sent a backhand past Lankinen at 4:57 of the first period on Dallas’ first shot on goal. Jason Robertson got the lone assist after setting up the play by stripping the puck from Suter, a fellow rookie.

Suter redeemed himself by cashing in a centering pass from Hagle, who sped down the right side and fed Suter for his fifth goal of the season.

"I wanted to get some space," Suter said. "He made a great play going down the side, cut in and give it to me. I actually didn’t know it was in. I just hear ‘Hages’ screaming."

The Blackhawks tied it at 14:04 of the second on a power-play goal by Janmark, who signed as a free agent last October after playing his first four NHL seasons with Dallas. Janmark drew a tripping penalty from John Klingberg and then redirected a shot through Oettinger’s pads.

The Stars appeared to take a 2-0 lead about four minutes into the second when Jamie Benn gathered a loose puck in the crease and lifted it over Lankinen’s left shoulder into the top of the net. But the Blackhawks successfully challenged that Benn’s backing into Lankinen seconds earlier constituted goalie interference.

Oettinger made his second straight start in net and fourth of the season for the Stars despite current No. 1 goalie Anton Khudobin being available. Khudobin didn’t dress for Sunday’s 2-1 overtime loss to the Blackhawks after being late to practice on Saturday.

"Goaltending is all about confidence," said Oettinger, the NHL’s youngest goalie at 22. "(When you're playing well) it’s slower in front of you. The puck’s a little bit bigger. It was a solid outing, but not to get two points out of the night is really disappointing."

HOW SWEDE IT WAS

Janmark and Klingberg are from Sweden and are close friends from their days together in Dallas. Before the game, Klingberg complimented his countryman’s game but said he needed to work on his shot.

Was Janmark pleased that his power-play goal came with Klingberg in the box?

"I’d rather have him on the ice when I score," Janmark said with only a slight grin.

Lankinen, a 25-year-old rookie, was the oldest of the four Blackhawks players on the ice at the end of the game. Suter is 24, while Hagel and defenseman Ian Mitchell are each 22.

Blackhawks coach Jeremy Colliton went with seven defensemen and only 11 forwards, with Madison Bowey making his season debut and playing 10:28. … Alexander Radulov, second on Dallas with 11 points, missed his second consecutive game with a lower-body injury. … This was regular-season game No. 2,063 for the Dallas Stars, one more than the franchise played as the Minnesota North Stars from 1967-93.

Blackhawks: Will host Columbus on Thursday and Saturday. They split a pair at Columbus at the end of January.

Stars: The third and fourth games of an eight-game homestand, their longest of the season, feature the Carolina Hurricanes beginning Thursday. The Stars’ next scheduled road game is Feb. 22 at Florida.