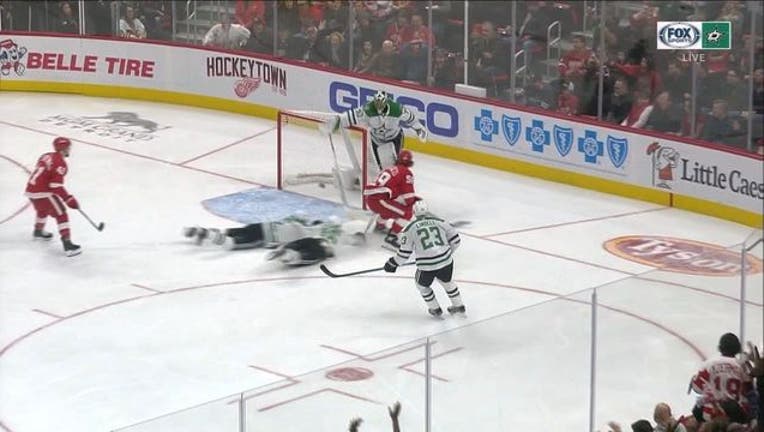 DETROIT (AP) - Anthony Mantha had a goal called back before scoring anyway and the Detroit Red Wings won at home for the first time this season with a 4-2 victory over the Dallas Stars on Sunday.

Mantha, who has struggled early in the season, had an apparent power-play goal disallowed in the first period because it was ruled he kicked it in.

"Yeah, I did (know that he kicked it in). I just tried to sell it. You never know," Mantha said. "If the league doesn't look at it, they called it a good goal on the ice. Things happen."

But he responded by tying the game at 1, 4:44 into the second period with his second goal.

Tyler Bertuzzi , defenseman Jonathan Ericsson and Justin Abdelkader also scored for Detroit (2-7-2), which had been 0-3-1 at Little Caesars Arena. Dylan Larkin had two assists and Jonathan Bernier stopped 28 shots for his first win as a Red Wing, after signing as a free agent in July.

"Once we got the lead I thought we were excellent in the third period," Red Wings coach Jeff Blashill said. "We played with confidence, I thought we ground them, we spent tons of time in their end."

Detroit got that lead by taking advantage of a lucky bounce.

Bertuzzi broke a 1-1 tie, 4:59 into the third period when the puck took an odd bounce off the boards in the corner, on a dump in, and bounced in front of the net as Bishop went behind the net to play it. Bertuzzi backhanded the puck into the empty net for his third goal.

"Kronner (defenseman Niklas Kronwall) tried to rim it hard so I could catch in on that far side," Bertuzzi said. "Got a good bounce and I was there to tap it in."

Ericsson made it 3-1, 9:20 into the third, on a wrist shot from the left point, as Mantha screened Bishop in front.

It was Ericsson's first goal.

Radek Faksa made it 3-2, with 36.3 seconds left with Bishop pulled for the extra attacker. It was Faksa's second goal.

"We were kind of like hoping to win instead of playing to win," Stars coach Jim Montgomery said. "It's not an excuse. But we didn't have our normal legs, we weren't talking, we weren't communicating well on the ice to each other, and we had really no jump."

Smith gave Dallas a 1-0 lead with 8:16 left in the first period when got control of the puck just outside the Detroit blue line, skated past Red Wings defensemen Kronwall and Nic Jensen and beat Bernier from the slot. It was Smith's first goal.

NOTE: It was Dallas C Tyler Seguin's 600th game. ... Stars general Manager Jim Nill was a longtime assistant GM with Detroit. ... Gemel Smith is the brother of Red Wings farmhand Givani Smith, who is with Grand Rapids of the American Hockey League.