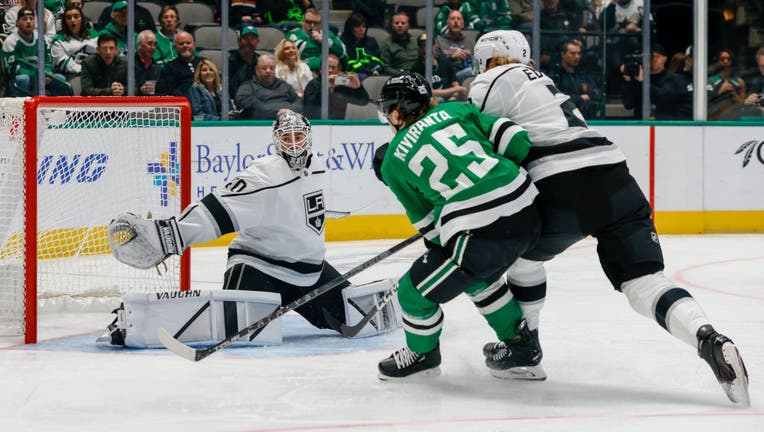 DALLAS - Roope Hintz’s second score of the game punctuated a three-goal flurry in 91 seconds and the Dallas Stars used four-goal outburst in the second period to beat the Los Angeles Kings 5-2 on Tuesday night.

Hintz also had an assist. Robertson, Jamie Benn and Miro Heiskanen each had two assists.

Dallas’ Scott Wedgewood stopped 30 shots to earn his first win of the season. It was Wedgewood’s third start, but his first since No. 1 goalie Jake Oettinger suffered a lower-body injury on Saturday.

Kevin Fiala and Arthur Kaliyev scored for the Kings, who were coming off a win at St. Louis a night earlier with four second-period goals. Cal Petersen made 35 saves for Los Angeles.

Heiskanen, a first-pair defenseman, excelled in his first game back after missing three straight with an upper-body injury. That included two-way play and serving as point man on the power play that went 3 for 4.

"He’s one of the best in the world for a reason," Stars coach Pete DeBoer said. "When he’s out of the lineup, we’re a different team."

Heiskanen said it wasn’t until Tuesday morning that he was confident he’d play.

The Stars rebounded from Saturday’s 6-3 defeat to the New York Rangers, their only loss in five home games.

"This league is all about response," DeBoer said. "You’re not going to be good every night. I think we really played well."

Kings coach Todd McLellan was disappointed his team didn’t come out mentally sharp for the second of the back-to-back set.

"If you don’t have your legs, you’d better have your brains; we didn’t have either," McLellan said. "The three goals — bang, bang, bang — really put a dagger in us."

Hintz opened the scoring 6:49 in with the first of three power-play goals for the Stars. The one-timer from the left circle followed Benn’s backhand pass from behind the goal line. The goal snapped an 0-for-14 drought for Dallas’ power play.

Fiala tied the score at 5:21 of the second period off a rebound before the Stars’ blitz began.

Robertson’s power-play goal was a one-timer from behind the right circle. Seguin scored on a wrist shot in the slot, and Hintz followed 14 seconds later on a breakaway.

Kaliyev scored on the power play at 14:37 of the second to pull Los Angeles within 4-2, but Pavelski answered four minutes later on another man advantage.

Oettinger, who leads the league in goals-against average at 1.40 and is second in save percentage (.952), is expected to be sidelined for at least a week.

Kings rookie defenseman Brandt Clarke left the bench late in the game. McLelland said he thought Clarke was hit in the mouth. … The Stars’ 18 first-period shots were a high for any period this season. … The Kings dressed 11 forwards and seven defensemen. … Los Angeles played its third game in four days.

Kings: At Chicago on Thursday to end a three-game trip.

Stars: At Arizona on Thursday to open a three-game trip.