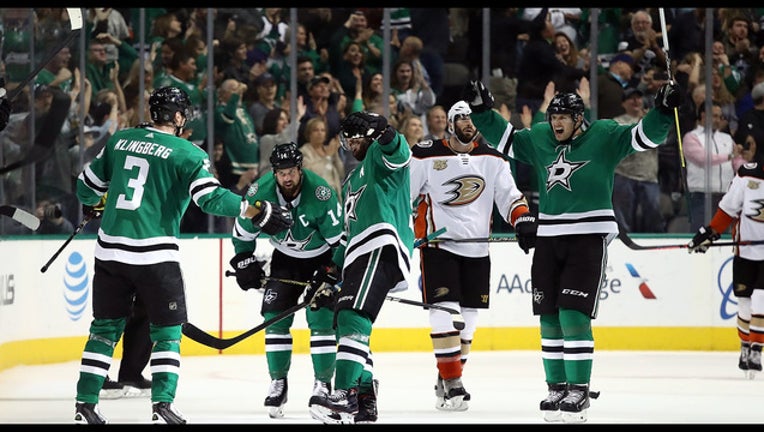 DALLAS, TX - OCTOBER 13: John Klingberg #3 of the Dallas Stars celebrates his goal in the second period against the Anaheim Ducks at American Airlines Center on October 13, 2018 in Dallas, Texas. (Photo by Ronald Martinez/Getty Images)

Klingberg scored the go-ahead goal late in the second period, when Dallas scored on four of its team-record 30 shots, and the Stars beat the Anaheim Ducks 5-3 on Saturday night.

Connor Carrick and Jamie Benn also scored for Dallas in the second. Tyler Seguin assisted on the goals by Radulov and Benn.

The barrage wiped out a 3-0 Anaheim lead and came against Ducks goalie John Gibson, who entered the game 3-0-1 with a 1.44 goals against average.

Radulov became the first Dallas player to score a goal in each of the first four games.

"It's always hard to come back from 3-0 down," Radulov said. "Today the hockey god was on our side."

Klingberg's goal from the right point to the upper left corner of the net came at 17:46, 2 seconds before a roughing penalty against Gibson expired.

"(The power play) was a huge key tonight, especially on that one when the game-winner was scored," Radulov said. "We were winning all those neutral pucks."

Radek Faksa added a length-of-the-ice, empty-net goal with 1:28 to play.

Anton Khudobin, making his Dallas debut in goal, had a good view of the action at the other end of the ice.

"It was amazing to see that comeback," Khudobin said. "If I could have a pillow, I would probably fall asleep."

The loss was Anaheim's first. Dallas is 3-1.

Anaheim's Jacob Silfverberg and Kiefer Sherwood had first-period goals, and Adam Henrique added a power-play goal at 8:09 of the second, when the Ducks had only four shots on goal.

At the first intermission, Stars coach Jim Montgomery made changes.

"I think it put a little desperation in us," Montgomery said. "We changed all four lines. I wanted Radulov to get (Valeri) Nichushkin going. I thought (Jason) Spezza would be a good center with that group."

Gibson made 40 saves while playing the first two periods. Ryan Miller had six in the third.

"We hung our goaltender out to dry," Ducks coach Randy Carlyle said. "That's inexcusable for a hockey club to put a guy in that type of situation, under siege for 20 minutes. They turned their game up."

Silfverberg took the puck in the right corner, skated around to the left point and sent a wrist shot past a screen by Max Comtois for the first goal at 9:01.

At 13:28, Sherwood scored his first NHL goal when he tipped Josh Manson's shot from the right point up and past Khubodin.

Dallas finally took advantage of the huge advantage in shots on goal at 11:14 of the second, when Radulov scored from the left faceoff circle on the Stars' first power play. At that point, they had outshot Anaheim 28-13.

That goal seemed to energize Dallas. On the Stars' next four shots, they scored twice 9 seconds apart to tie the game at 3.

Stars: Play the first of two games in two nights on Monday at Ottawa.