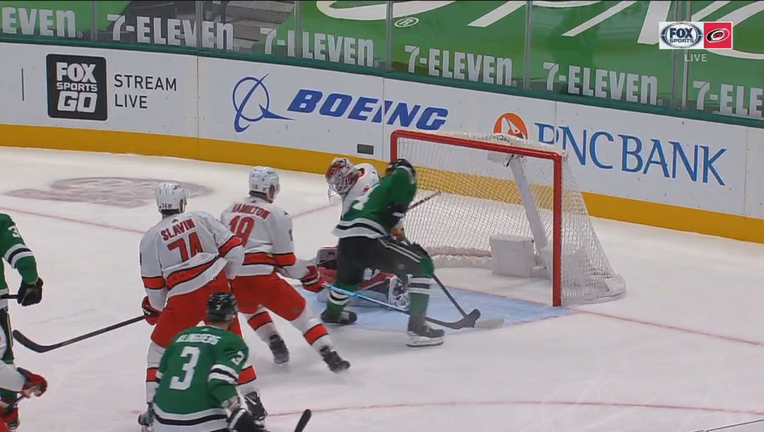 DALLAS - Nino Niederreiter scored the tiebreaking goal early in the third period and the Carolina Hurricanes beat the Dallas Stars 5-3 on Thursday night, their third win this season against the defending Western Conference champions.

Niederreiter went in on a breakaway off a long pass from Dougie Hamilton and got goaltender Anton Khudobin leaning to the right before scoring to his left. Warren Foegele added a goal in the final minute.

Jordan Staal and Sebastian Aho both had a goal and an assist for the Hurricanes. It was Staal's fourth multipoint effort in his last six games.

"I’ve been getting some good bounces, felt good coming into the season," Staal said. "Just feel confident and playing well, and just kind of trying to ride it as best I can."

Joe Pavelski scored his eighth  of the year for Dallas, which has only one win its last seven games since sweeping a four-game homestand to open the season. The Stars lost on back-to-back days at the end of January in Carolina, including a shootout.

James Reimer made 34 saves for the Hurricanes and has won all three against Dallas.

"That’s probably the best offensive output we’ve had, and give Reimer a lot of credit," Stars coach Rick Bowness said. "He made some huge saves, especially in the second period. Thought we could have had four or five goals the second period alone."

Dallas scored three times in the second, including Pavelski’s one-timer on a 5-on-3 power play, but also had a goal taken off the board when Carolina challenged and replays showed the Stars were clearly offside.

The Hurricanes tied the game at 3 with 27 seconds left in the period when Brock McGinn extended his goal streak to four games by scoring on a long rebound.

"It was a gritty win," Carolina coach Rod Brind'Amour said.

Staal was falling down when he swiped Andrei Svechnikov's pass into the net for a 2-1 lead earlier in the period, and had both elbows on the ice when pumping his arms to celebrate his goal.

"I don’t know how else to say it. I’ve been saying it forever. These plays he’s been making are the same plays he’s been making over and over for years. We’re connecting on them right now," Brind'Amour said of Staal. "I can’t tell you how many times I come back after the game, how did Jordan not have three points? ... Right now he’s getting, I guess, his due. He’s always made good plays and he’s always had scoring opportunities."

That play came only 30 seconds after the Stars tied the game on Mark Pysyk's first goal. Pysyk followed his own shot and poked home the rebound.

Roope Hintz thought he had the Stars even again after knocking in the rebound of Jason Robertson’s attempted wraparound. That was the goal that was challenged, but it was 2-2 only 23 seconds later when Hintz scored on a hard charge and a pass from Denis Gurianov.

Staal assisted on Aho's power-play goal in the first period with a nifty backhand pass. Staal had his back to the net when he delivered a no-look pass to Aho in the right circle.

Hintz had a shot just over two minutes into the game that skimmed over the top of Reimer's glove and ricocheted off and over the crossbar.

"We have to get better from the start, in first periods," Hintz said.

Khudobin stopped 27 shots while playing for the first time in three games. He was disciplined and didn’t dress Sunday, a day after being late for practice. Rookie goalie Jake Oettinger made consecutive starts for the first time in his NHL career, stopping a total of 60 shots in back-to-back 2-1 overtime losses at home to the Chicago Blackhawks.

Dallas placed forward Alexander Radulov on injured reserve. He missed his third game in a row because of a lower-body injury.

SOME FANS IN THE SEATS

Carolina, in its 11th game, played before fans for the first time this season. The reduced-capacity attendance was 3,687, the smallest crowd in the Stars' seven home games. The usual hockey capacity is 18,532 at the American Airlines Center, where twice attendance has topped out at 4,214 this season.

The teams play again Saturday night, which will leave the Stars halfway through an eight-game homestand — their longest of the season.