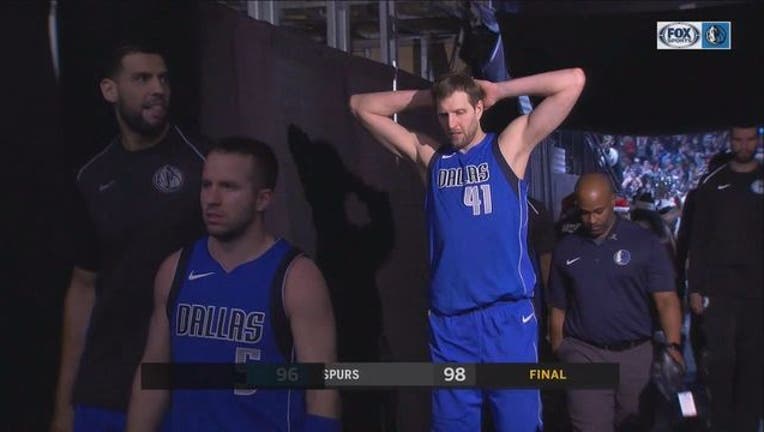 SAN ANTONIO (AP) - LaMarcus Aldridge had 22 points and 14 rebounds and the San Antonio Spurs scored the final 13 points of the game, rallying for a 98-96 victory over the Dallas Mavericks on Saturday night.

Maxi Kleber had 21 points and Dirk Nowitzki added 19 for Dallas in the final regular season matchup between the Southwest Division rivals.

Kleber's 3-pointer gave Dallas a 96-85 lead with 4:11 remaining, but the Spurs held them scoreless the remainder of the game.

Aldridge's fall-away, 11-foot jumper tied the game at 96 with 23.4 seconds remaining and Manu Ginobili's driving layup with 3.1 seconds was the game-winning shot.

Aldridge had his 12th double-double of the season to help offset the absences of starters Kawhi Leonard, Tony Parker and Danny Green.

Coming off a 15-point blowout in Houston on Friday night, San Antonio was able to avoid its third straight loss.

The Spurs missed their first five shots, all short jumpers from Aldridge and Pau Gasol, on their way to shooting 30 percent in the opening quarter.

The Mavericks took advantage, charging to a 31-18 lead.

Davis Bertans finished with 13 points and Ginobili added 12 off the bench.

The Spurs closed within 72-68 after trailing by as many as 16 points to help set up the late-game heroics.

Mavericks: Smith missed a fifth straight game with a strained left hip. Also sitting out were Seth Curry (stress reaction, left tibia), Dorian Finney-Smith (left quadriceps tendinitis), Josh McRoberts (low extremity injury), and Nerlens Noel (left thumb). ... Dallas is 2-12 on the road after going 12-29 away from home last season. . The Mavericks are 5-1 when scoring at least 30 points in the first quarter. . Dallas has made 10-plus 3-pointers in 22 of their first 30 games this season. . Dallas has 12 turnovers or less in seven straight games and nine of its last 10.

Spurs: Leonard and Parker sat out the second game of a back-to-back as part of their recovery from quadriceps injuries that kept both out for much of the season. . Green was scratched from the lineup an hour before the game due to tightness in his left groin. . San Antonio is 6-7 in back-to-back games this season, losing both games once this season. . Ginobili has played in 522 games in the AT&T Center, surpassing Tim Duncan for second overall to Parker's 550 games at home. . Bryn Forbes made his third career start, joining Avery Johnson as only the second undrafted player under 6-foot-4 in Spurs history to start 3-plus games.

Mavericks: Host Phoenix on Monday night before playing five games against teams from the Eastern Conference.