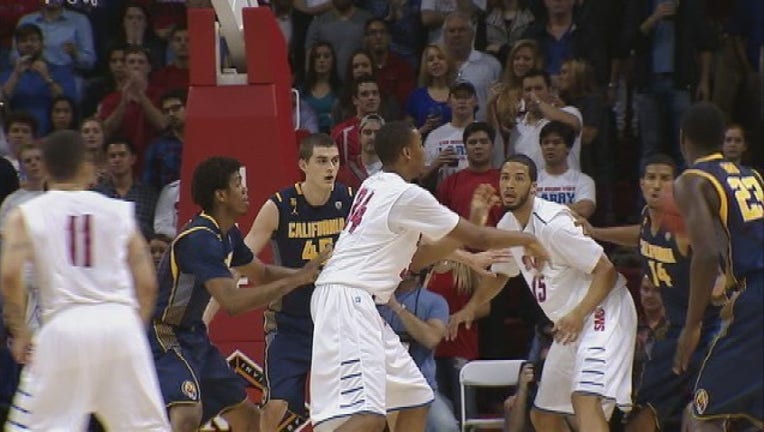 DALLAS (AP) — SMU athletic director Rick Hart reiterated the school's decision to accept a one-year postseason ban in men's basketball after players released a statement on their own Wednesday expressing their disappointment over NCAA sanctions.

"We understand and share the men's basketball student-athletes' disappointment over the NCAA sanctions, however, the severity of the violations that SMU acknowledges occurred mandates at minimum a one-year postseason ban according to the new NCAA penalty structure," Hart said in a statement of his own.

In a statement to CBS Sports earlier, the players expressed their "profound disappointment" with the sanctions and claimed the NCAA "exercised questionable judgment in punishing innocent people." They also asked that the NCAA reconsider.

SMU last week announced that it would not appeal the postseason ban or the nine-game suspension for coach Larry Brown after the NCAA ruled that a former men's basketball administrative assistant completed the online course work for a student to meet NCAA initial eligibility and be admitted to the university.

"We deliberated carefully and discussed our options with campus leaders as well as internal and external counsel, and, after careful consideration, we decided not to appeal the NCAA postseason ban or partial season suspension of Coach Brown," Hart said. "Coach Brown and his staff agreed that it is in the best interests of the program to accept these sanctions and move forward."

Hart said he supported the players being able to "make up their own minds on important matters and to take positions of leadership in defending their positions."

The school is appealing several sanctions, including scholarship losses in men's basketball and men's golf, and recruiting restrictions in men's basketball. SMU will also appeal the penalty applied to men's golf that resulted in a postseason ban for the team and for individual competition, though that process could take weeks or months.

U.S. Amateur champion Bryson DeChambeau has left SMU because of the penalties that, unless reversed, would keep the senior from defending his NCAA individual golf title next summer. DeChambeau last summer joined Jack Nicklaus, Phil Mickelson, Tiger Woods and Ryan Moore as the only players to win the U.S. Amateur and NCAA individual titles in the same year.

The basketball team will not have a chance to return to the NCAA Tournament at the end of the 2015-16 season after making the field last year for the first time since 1993. The tournament return last season came in Brown's third at SMU.

In their statement, the basketball players claimed they "had no voice" in the case and were denied due process. They also expressed their full support of Brown, who they called a great basketball coach, "a life-skills teacher, a constantly available adviser, and a father figure to all of his players."

"The suggestion or conclusion that SMU basketball does not recognize the importance of NCAA rules and compliance with those rules cannot be farther from the truth," they said. "Every single day, Coach Brown and our compliance staff remind and educate us about specific rules and the general principles of fair competition, honesty, and decency."

This story has been corrected to show it's Tiger Woods.