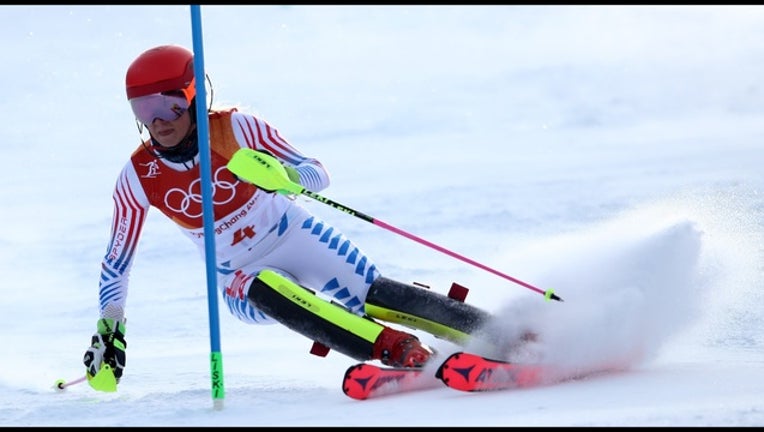 PYEONGCHANG, South Korea (AP) - Frida Hansdotter held off the conservative-skiing Mikaela Shiffrin and the rest of a tightly bunched field to win the Olympic slalom title Friday at the Pyeongchang Games.

In second after the opening run, the Swedish skier powered through the sun-splashed course on her final charge to finish in a combined time of 1 minute, 38.63 seconds. First-run leader Wendy Holdener of Switzerland was second and Katharina Gallhuber of Austria earned a surprise bronze.

Another surprise: Shiffrin finishing fourth. The American standout won the Olympic slalom title four years ago in Sochi when she was only 18. She has also won seven of her last 10 World Cup races and three straight world championship titles.

Holdener fully expected to come down and see Shiffrin leading.

She wasn't. It was Hansdotter.

"A lot of surprises today," Holdener said. "Mikaela skis that good. She will do it another time."

Shiffrin was at a loss to describe what happened and why she wasn't attacking the course more.

"I've been skiing aggressively in slalom all season long. I've been confident, comfortable," Shiffrin said. "Coming here and skiing the way I did, really conservative, was a huge disappointment. ... That's how life goes."

On her final run, Shiffrin didn't have her usual charge. Before her first run, she dealt with something else - something resembling nerves.

Shiffrin, who won the giant slalom the day before, was asked in an NBC interview about throwing up before stepping into the starting gate to start her slalom run.

"That was kind of sudden. It almost felt like a virus," Shiffrin said, laughing. "Kind of puking, less about nerves. But we'll see."

Upon further reflection, it wasn't a virus.

"It might've been a little bit of me trying to make an excuse," Shiffrin said. "Sometimes I feel the only one who can beat myself in slalom is me. I beat myself ... So it's a really big bummer. I'll learn."

Hansdotter became the second Swedish woman to capture an Olympic gold in the discipline, joining Anja Paerson, who won the event at the 2006 Turin Games.

There were seven racers within a second of Holdener's first-run time, with Hansdotter 0.20 seconds back. Gallhuber started her final run trailing by 1.23 seconds - a sizable gap to make up.

"Unbelievable that it happened," said the 20-year-old Gallhuber, whose best finish in a World Cup race was fifth last month in a city event. "I'm speechless. I can't believe."

Shiffrin said she was a little drained after all the interviews and other commitments that followed her win in the giant slalom on Thursday. The medal ceremony didn't start until about 8 p.m., and she didn't get to bed until 10 p.m., which is very late for her these days.

On Saturday, Lindsey Vonn will make her Pyeongchang Games debut in the super-G at the speed course in Jeongseon. Vonn missed the Sochi Games with a knee injury.

Shiffrin will skip the super-G race.