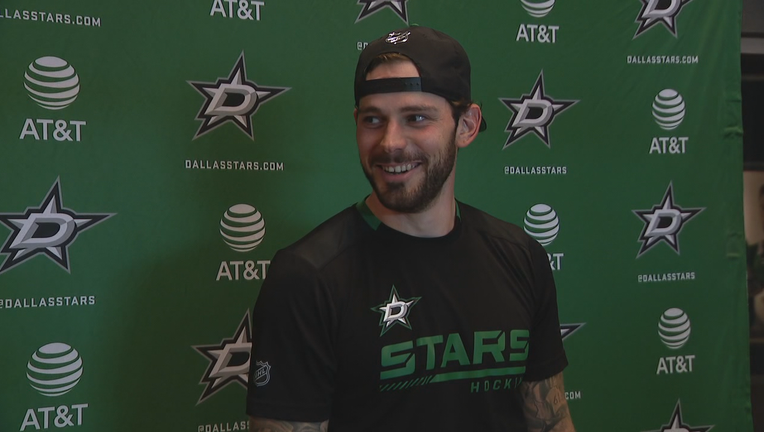 FRISCO, Texas - Tyler Seguin figures he is at a point in his career when he will never be fully healthy again. The Dallas Stars 29-year-old forward is about as close as he can get to that after missing all but three games last season during his rehab and recovery from hip surgery.

"When you’re on the back nine of your career, I don’t know if 100% is ever going to be legit, but definitely high 90s. I’m feeling great, I’m really excited," said Seguin, a six-time All-Star going into his 12th NHL season. "It’s hard not to have a smile on my face every day at training camp, being a part of the team again."

When the Stars opened training camp Thursday, exactly one year to the day after they were playing Game 3 of the Stanley Cup Final for the pandemic-interrupted 2020 season, Seguin wasn't the only Stars player back from injury. Goaltender Ben Bishop and top-line forward Alexander Radulov were also on the ice.

Bishop didn't play at all last season after twice having knee surgery. The 35-year-old Radulov, who was primarily on the top line with Jamie Benn and Joe Pavelski, had 12 points in 11 games before surgery to repair a core muscle injury that had bothered him for several seasons.

"Bish looked fantastic, Seggy was skating well, and so was Rads. They know their bodies, and they seemed to handle it OK," coach Rick Bowness said. "Are they 100%? No. But hopefully by Oct. 14th, they all will be."

Missing that trio for most or parts of the condensed 56-game season certainly contributed to the Stars missing the playoffs only six months after their first Stanley Cup Final appearance since 2000 ended with a Game 6 loss to Tampa Bay. The Stars had an NHL-high 14 overtime/shootout losses in the second consecutive season altered by the pandemic.

Roope Hintz had 43 points in 41 games but is healthy after that point-a-minute season while playing through a lingering groin injury. General manager Jim Nill said Hintz is on schedule to be ready for the season.

Bishop's status is still uncertain, though he skated throughout the summer and hopes to play in a preseason game. The goalie said he "absolutely" expects to play this season.

"It feels unbelievable to be back practicing with the guys. I think that’s my first full practice by myself since pre-COVID. So it’s been a long time coming," Bishop said. "It’s still a building process. We’re still trying to get better every day as far as myself and the knee. So just kind of take it day by day right now and see where it goes."

Bishop had his first knee surgery in May 2020 and didn’t play after the first round of the Stanley Cup playoffs. The knee bothered him throughout that postseason run, which was followed by another surgery to repair torn meniscus.

Seguin, who also had arthroscopic knee surgery while out, made his season debut May 3, six months and a day after surgery to repair a torn labrum in his hip. He scored two goals in his three games, including a third-period goal to force overtime in his first one, before Dallas was knocked out of playoff contention. He also had a bout with COVID-19 over the summer despite being vaccinated.

"I never wanted to have this reset, but having it has been a blessing physically and, honestly, mentally," Seguin said. "You’re remembering how much you love this game, and how much I love the routine of it and the lifestyle of an NHL player, being on the plane, and being a part of something bigger than yourself. It was dark days not being a part of that."

Radulov, going into the final season of his five-year deal with the Stars, said everything seems to be back to normal after having surgery for the first time in his hockey career. He said he went three months off the ice before starting to skate again in mid-July.

"At some point, you realize you’re not getting young. It’s tough, but I still feel I can play, and it’s good to be back and feel 100%," Radulov said. "I tried to manage it. At some point, it was getting worse and worse, and then it was chronic."