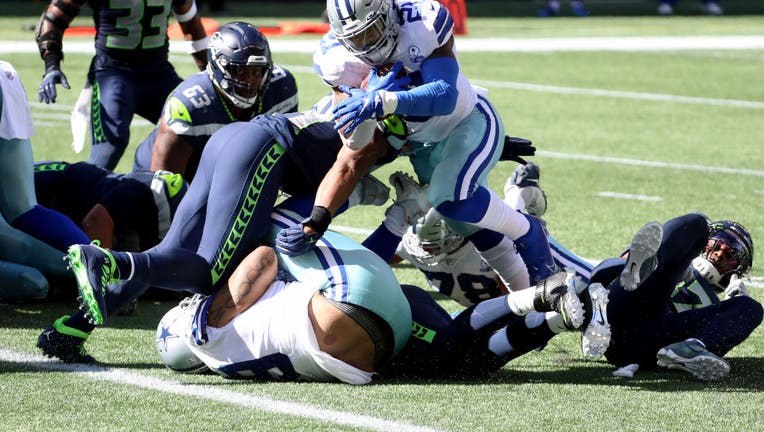 SEATTLE, WASHINGTON - SEPTEMBER 27: Ezekiel Elliott #21 of the Dallas Cowboys dives for the end zone to score a touchdown against the Seattle Seahawks during the first quarter in the game at CenturyLink Field on September 27, 2020 in Seattle, Washing

SEATTLE (AP) - DK Metcalf made up for a huge first-half blunder by catching a 29-yard touchdown pass from Russell Wilson with 1:47 remaining, and the Seattle Seahawks held off the Dallas Cowboys 38-31 on Sunday.

It was Metcalf who found redemption in the closing minutes.

Metcalf appeared to have a walk-in touchdown after hauling in a deep pass from Wilson late in the first quarter. But he was careless with the ball in the final few steps before the goal line, and Dallas cornerback Trevon Diggs came up from behind and knocked the ball free. It went out of the end zone for a touchback.

Instead of a touchdown and 16-3 lead for Seattle, it was a 62-yard reception and a forgettable moment.

Metcalf was mostly quiet after his mistake as Tyler Lockett became the favorite target for Wilson. But when Seattle needed a big play late, Wilson floated a pass into the end zone and allowed Metcalf to run underneath it for the deciding touchdown.

Wilson was 27 of 40 for 315 yards. His latest bit of fourth-quarter magic ruined Dak Prescott’s attempt at a second straight major comeback.

Dallas trailed 30-15 after Prescott fumbled on the first play of the second half and Wilson subsequently threw his fourth TD pass. But Prescott threw TD passes of 42 yards to Cedrick Wilson and 43 yards to Michael Gallup, and Greg Zuerlein’s 42-yard field goal with 4:03 left gave Dallas a 31-30 lead.

Prescott had one last chance after Metcalf’s TD reception. He led the Cowboys to the Seattle 22 but was sacked by rookie Alton Robinson on second down, and Dallas had use its final timeout with 16 seconds left. On third down, Prescott’s desperation throw to the end zone was intercepted by Ryan Neal.

Prescott finished 37 of 57 for 472 yards, with three touchdowns and two interceptions. He set career highs for yards and attempts.

While Prescott became the latest QB to have a big day against Seattle’s leaky secondary, the Seahawks held Ezekiel Elliott in check. Elliott finished with 34 yards rushing on 14 carries and scored on a 1-yard run in the first half.

Lockett set a career high with three TD receptions and finished with nine catches for 100 yards. Lockett scored once from 43 yards out and twice from the 1-yard line. Jacob Hollister also had a 1-yard TD catch and made the reception on Seattle’s 2-point conversion after Metcalf’s TD.

Dallas DE Aldon Smith had three sacks, two tackles for loss, four quarterback hits and a pass defensed in his most impactful game of the season. Dallas finished with four sacks of Wilson.

Adams suffered a groin injury early in the fourth quarter when he took an awkward step on a rush of Prescott. He immediately pulled himself from the game and was limping on the sideline.

Carson was hurt on Seattle’s final drive. Dallas defensive tackle Trysten Hill twisted Carson awkwardly as he was pulled down on a 2-yard run.

Seattle lost both starting guards — Mike Iupati (knee) and Damien Lewis (ankle) — to injuries in the first half. Rookie linebacker Jordyn Brooks, making his first start, also left in the second half with a knee injury.

Seahawks: Make another East Coast trip to play at Miami next Sunday.