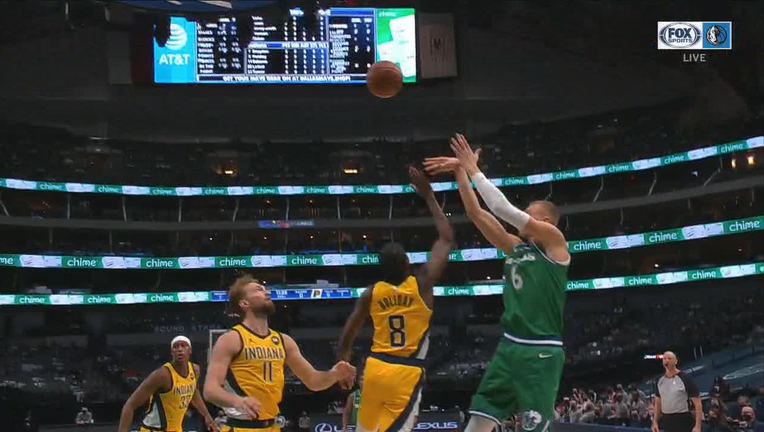 DALLAS (AP) - Domantas Sabonis had 22 points and 15 rebounds, Malcolm Brogdon also scored 22 points, and the Indiana Pacers hit early and often from long range in a 109-94 win over the Dallas Mavericks on Friday night.

The Pacers hit 20 3-pointers led by Brogdon’s 6-for-9 effort, matching the franchise record they previously set this season, to win for the fourth time in their last five games.

Kristaps Porzingis had 31 points and a season-high 18 rebounds for the Mavericks, who played without All-Star guard Luka Doncic — among the top five in the NBA in scoring and assists — due to back tightness. Tim Hardaway Jr., second among NBA reserves in scoring, had 16 points.

Dallas coach Rick Carlisle said before the game that Doncic would travel with the team Friday night in hopes of being available for Saturday night’s game at New Orleans.

The Pacers built a 17-point lead three minutes into the third quarter after outscoring Dallas 45-12 from behind the arc to that point. The Mavericks pulled to 84-80 two minutes into the fourth quarter, but the Pacers responded with a 14-2 run to retain control.

Myles Turner, the NBA’s leader in blocks at 3.4 per game, had seven against Dallas. ... Indiana's Doug McDermott, who had 12 points on four 3s, went out in the second half with a right ankle sprain. ... Porzingis had 15 points and 13 rebounds in the first half, the first time in his career that he’s had a double-double before halftime.

Pacers: At Washington on Monday night.

Mavericks: At New Orleans on Saturday night to open a season-high five-game trip.