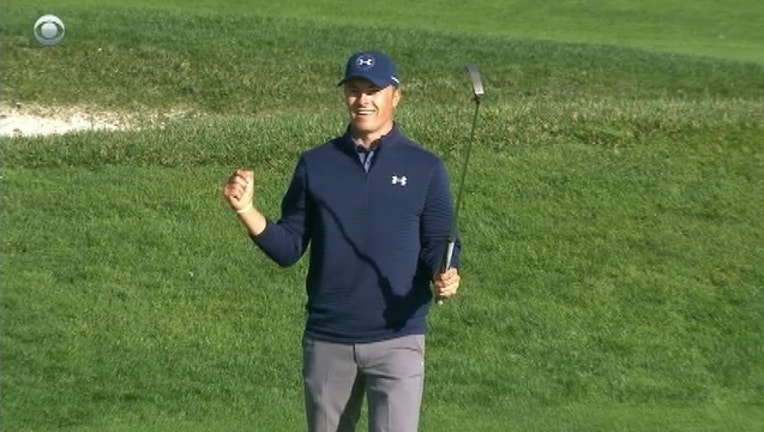 AUGUSTA, Ga. (AP) - Justin Rose charged from behind on the back nine at Augusta National. Sergio Garcia received the kind of break that allowed him to wonder if maybe the golfing gods are finally on his side after all these years.

They wound up tied for the lead Saturday on a tense afternoon that set the stage for a Masters finale still up for grabs.

And that includes Jordan Spieth in the mix for the fourth straight year.

Rose birdied five of his last seven holes, the last two from 20 feet on No. 17 and 12 feet on No. 18, for a 5-under 67 that gave him a share of the lead going into the final round for the first time in a major. He won the U.S. Open four years ago at Merion from behind.

Garcia hung his head in the 13th fairway when his second shot disappeared off a bank toward the tributary of Rae's Creek. Moments later, he realized the ball bounced softly enough off the side of the bank to stop halfway down. He chipped up to tap-in range, turning a potential bogey into a birdie.

The 37-year-old Spaniard finished off his round by clenching his fist when a 7-foot par putt dropped into the cup for a 70.

They had a one-shot lead over Rickie Fowler, who made birdies on all four of the par 5s to offset a few mistakes in a round of 71.

Perhaps the most daunting name at Augusta National was Spieth, who began this Masters with a quadruple-bogey 9 on the 15th hole of the opening round and was 10 shots out of the lead when he trudged off the course on Thursday.

He pulled off a shot that would have made Arnold Palmer proud, a 4-iron off the pine straw and over the water on the 13th to 30 feet for a two-putt birdie. He nearly holed a wedge from the fairway on the 15th for another birdie and wound up with a 68.

Spieth won the Masters two years ago and was runner-up last year after losing a five-shot lead on the back nine. The 23-year-old Texan had a two-shot lead with 11 holes to play in his debut in 2014 before Bubba Watson overtook him.

Here he is again.

"Waking up and you have a chance to win your favorite tournament that you've dreamt of winning and competing in since you were a kid, and to be able to have your fourth opportunity now ... I didn't know going into my first one if I would have five chances in my life," Spieth said. "So it's awesome."

Spieth was tied with Ryan Moore (69) and Charley Hoffman, who led for much of the day until he put his tee shot into the water on the par-3 16th and made double bogey. Hoffman battled for par on the last hole to stay just two shots behind.

Only 10 players remained under par, all of them separated by five shots.

Rory McIlroy has more work to do if he wants that green jacket to complete a career Grand Slam. McIlroy twice had to settle for pars despite being in ideal position on the par 5s on the back nine, and his 71 kept him from making up any ground. He was six shots behind.

Phil Mickelson started out birdie-birdie before his round fell apart with a chunked wedge on No. 3 that led to double bogey. Mickelson shot 39 on the front and 74 for the round, leaving him in a tie for 21st and eight shots behind in his bid to become at age 46 the oldest Masters champion.