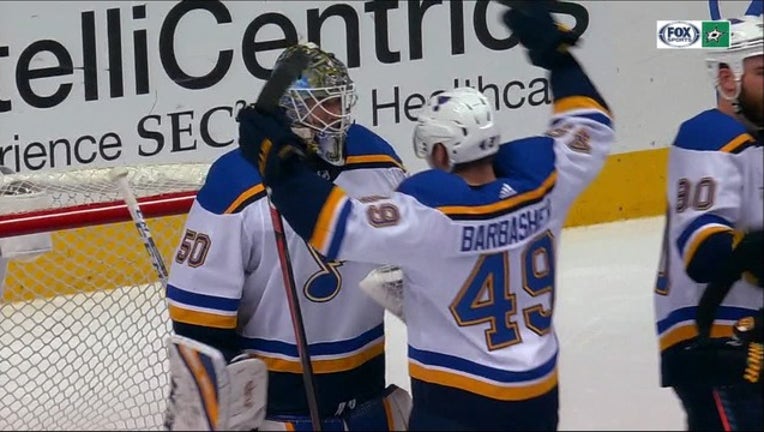 Binnington, who has played in six NHL games, is 3-0 in three starts. The 25-year-old has allowed only two goals in those starts. Binnington shut out Philadelphia 1-0 on Monday and beat Montreal 4-1 Thursday.

He made 21 saves on Saturday, the first time he has started consecutive games.

Pat Maroon also scored for the Blues, who have won two straight for the fifth time this season.

Tarasenko and Maroon scored first-period goals against Bishop, who won 3-1 at St. Louis four nights earlier. Veteran Jake Allen was in goal for the Blues in that game.

Condra broke up Binnington's chance for a second shutout, scoring his first goal with Dallas at 8:35 of the third period.

The Stars have lost three of four, but are in third place in the Central Division.

Tarasenko scored on the first shot of the game, 34 seconds in, from the right faceoff circle. Maroon's backhand from the right of the net extended the Blues' lead to 2-0 at 9:54.

Each team had 10 shots on goal in the first period.

Dallas had a scoring chance midway through the second period, but Jason Spezza's wrist shot from the top of the slot went over Binnington's shoulder and off the crossbar.

In the third, a shot blocked in front went to Condra at the right of the net and he scored on a short wrist shot. St. Louis challenged the goal looking for goaltender interference, but the goal stood.

Tarasenko scored his second goal on the power play at 12:38. Oskar Sundqvist picked up his second assist of the game.

NOTES: Tarasenko has 15 career goals against Dallas. He also has seven assists for 22 points in 25 games. Over the last five seasons, he is tied with Winnipeg's Patrik Laine for the most goals (14) vs. the Stars over the last five seasons. . Binnington was leading the AHL with a 2.08 goals against percentage when he was promoted from San Antonio. . The win improved the Blues' record under interim coach Craig Berube to 12-12-1. . Condra was playing in his fifth game since being promoted from Texas of the AHL. His 40th NHL goal was his first since April 7, 2016. . Dallas D John Klingberg assisted on Condra's goal and he has five points (one goal, four assists) in the last four games.

Blues: Visit Washington on Monday for the second game of a four-game trip.

Stars: Host Tampa Bay on Tuesday in the second of a six-game homestand.