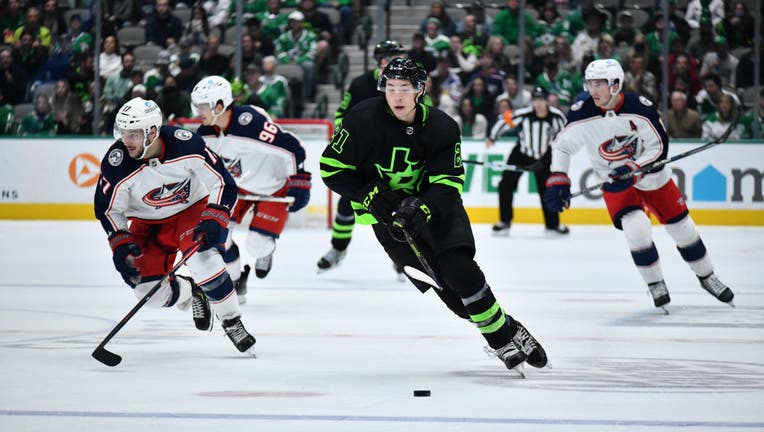 DALLAS, TX - DECEMBER 2: Jason Robertson #21 of the Dallas Stars handles the puck against the Columbus Blue Jackets at the American Airlines Center on December 2, 2021 in Dallas, Texas. (Photo by Glenn James/NHLI via Getty Images)

DALLAS (AP) - Jason Robertson scored 68 seconds in and added the go-ahead goal late in the second period as the streaking Dallas Stars beat the Columbus Blue Jackets 3-2 on Thursday night.

It was the Stars' sixth consecutive win and seventh straight at home. They have outscored their opponents 21-7 during the winning streak.

Jake Oettinger made 20 saves and improved to 5-0. It was just the second time this season he allowed two goals.

Emergency starter Daniil Tarasov stopped 34 shots for the Blue Jackets. Boone Jenner and Alexandre Texier had the goals for Columbus, outscored 15-5 while losing the first three games of its road trip.

In the game's first minute, Roope Hintz, coming off a hat trick Tuesday, skated in on Tarasov but shot wide. On the Stars' next trip into the Columbus zone, the rebound of a shot by Hakanpaa off teammate Joe Pavelski went out to Robertson in the left faceoff circle. He scored into the short side on the second NHL shot Tarasov faced.

Blue Jackets goalies Elvis Merzlikins and Joonas Korpisalo both came down with an illness not connected to COVID-19. Tarasov didn't arrive from Cleveland, where he was 5-2-2 with a 2.96 goals-against average for the AHL's Monsters, until after the morning skate.

Casey Sherwood, 36, an owner of a home-remodeling company and an amateur hockey player in the Metroplex, was in goal for the morning workout. He knew Columbus coach Brad Larsen when both lived in Colorado. Merzlikins recovered enough to serve as the backup for the game.

Jenner tied it at 6:53 of the first period with his team-high 11th goal, sliding in a backhand at the end of a breakaway just ahead of the Stars' Denis Gurianov.

Texier sent a wrist shot past Oettinger just 1:25 into the second for a 2-1 lead.

After Texier's goal, the Stars regrouped. Dallas outshot the Blue Jackets in the period 19-6 but didn't score until the final four minutes, when goals by Seguin and Robertson 49 seconds apart gave Dallas its 3-2 lead.

Briefly, it appeared Columbus scored at the end of the second, but a video review showed that time expired before the puck crossed the goal line.

NOTES: Dallas D John Klingberg was scratched, also because of an illness not related to COVID-19. ... Pavelski has nine points (three goals, six assists) in the last four games. ... Hakanpaa had two points for the first time in 82 career NHL games. His four points this season have equaled his season-best four points from 2020-21. ... Columbus has allowed opponents at least 33 shots on goal in seven straight games. ... The Blue Jackets expected to have C Emil Bernstrom (strained oblique) dressed for the first time this season, but he was inactive for the 21st game.