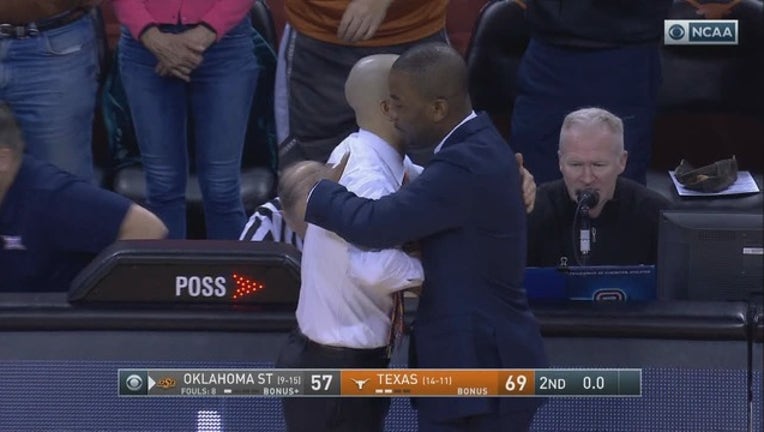 The Cowboys, fighting to get out of the bottom of the Big 12, have lost eight of their last nine and haven't won a Big 12 matchup since Jan. 12. One of their only two league wins was over Texas in the first matchup.

Oklahoma State (9-16, 2-10) looked to do it again with a flurry of early 3-pointers, including three by Thomas Dziagwa. Texas pushed its defense farther out to guard the Cowboys shooters and Oklahoma State made just one over the final 9 minutes of the first half.

Texas trailed 20-19 before closing the first half on a 19-7 run punctuated by Roach's 3-pointer from the corner with 1 second left in the half.

Texas led by 13 early in the second before the Cowboys cut it 42-38. The Longhorns responded with three straight baskets and a 3-point play by Courtney Ramey to end the threat.

Oklahoma State: The Cowboys have fallen on hard times and had very little working offensively when Dziagwa wasn't firing away from long range. The Cowboys were 12 of 30 inside the arc and went 9 of 18 from the free throw line. Dziagwa was 0-6 when he wasn't shooting 3-pointers.

Texas: The Longhorns will like the look of a confident shooting stroke from Osetkowski, who came in just 2 of 21 shooting 3-pointers in the previous nine games. He made two from the same spot in right corner in the first half, then made another with 7:12 to play that put Texas ahead by 10. His ability to score away from the basket will be key to the Texas offense over the stretch run of the season.

Texas plays Oklahoma Saturday, looking for a season sweep over the Sooners. Texas won the previous meeting 75-72 when the Sooners missed a 3-pointer in the final seconds.