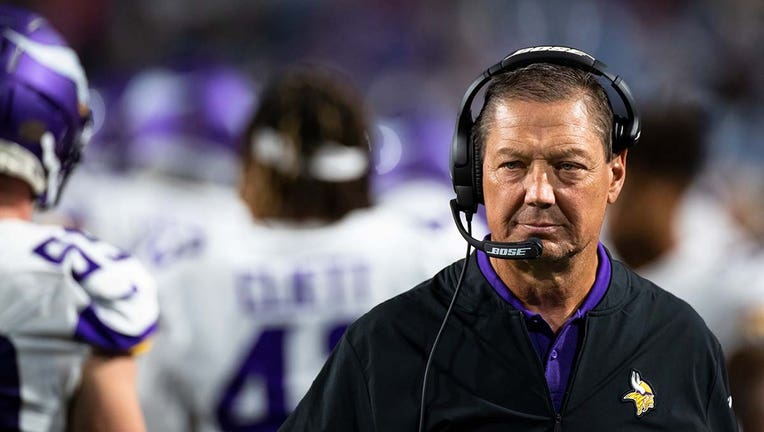 Offensive line coach Rick Dennison of the Minnesota Vikings walks the sideline during the second half of a preseason game against the Buffalo Bills at New Era Field on August 29, 2019 in Orchard Park, New York. Buffalo defeats Minnesota 27-23. (Photo (Brett Carlsen/Getty Images)

MINNEAPOLIS (FOX 9) - The Minnesota Vikings and offensive line coach Rick Dennison are parting ways after Dennison refused to get a COVID-19 vaccine, according to ESPN Vikings beat reporter Courtney Cronin. Dennison is believed to be the first NFL position coach out of a job after objecting to a vaccine.

The Vikings released the following statement on Dennison's status: "The Vikings continue to hold discussions with Offensive Line Coach Rick Dennison regarding the NFL-NFLPA COVID-19 Protocols for training camp and preseason games. At this time, Coach Dennison does not have an exemption to the vaccination requirements of those protocols. We will adhere to the requirements of the protocols and of applicable law."

Vikings running back Alexander Mattison responded to the report on Dennison on Twitter, saying, "Smh, they act as if we didn’t successfully play a whole season last year. Don’t make no sense. I’m rockin wit you 100% coach."

Earlier this year an NFL memo to teams stated that their Tier 1 and Tier 2 employees, with the exception of players, "should be expected to be vaccinated unless they have a bona fide medical or religious ground for not doing so." The memo further stated that those who refuse the vaccine will not be allowed in "football only" areas and will be unable to work directly with or near players.

Are the Vikings primed for a Super Bowl run this year? Linebacker Anthony Barr thinks so. Ahead of his charity fashion show, Anthony Barr appeared on FOX 9 Sports Now with Jim Rich to talk about the offseason and how far he things the Vikings will go this season. Barr says he has high hopes for the 2021 season which he thinks will end with a trip to the Super Bowl. As for his fundraiser, the fashion show is set to take place in Minneapolis this Thursday. For more information on that and Barr's charity organization, you can visit raisethebarr.org.

Earlier this week, the NFL sent another memo to teams stating that if a game gets canceled due to a COVID-19 outbreak among unvaccinated players, the team with the outbreak will have to forfeit and take a loss for playoff seeding. That team will also be responsible for financial losses, and could be disciplined by NFL Commissioner Roger Goodell.

Dennison has strong ties to recently-retired Vikings offensive coordinator Gary Kubiak, working with him in Denver, Houston and Baltimore. The Vikings offense is led this season by Gary’s son, Klint Kubiak.

Number of NFL players in vaccination process up to 80%

The number of NFL players with at least one dose of the COVID-19 vaccine has reached 80%, with nine teams having 90% or more of their players in that category. Five teams are at less than 70%.

"I think we are off to an excellent start," Sills said. "Those numbers are much higher than what we're seeing in society as a whole. There has been a lot of movement in that area. As you see players coming to training camp, you will see more players beginning that process (of vaccination)."