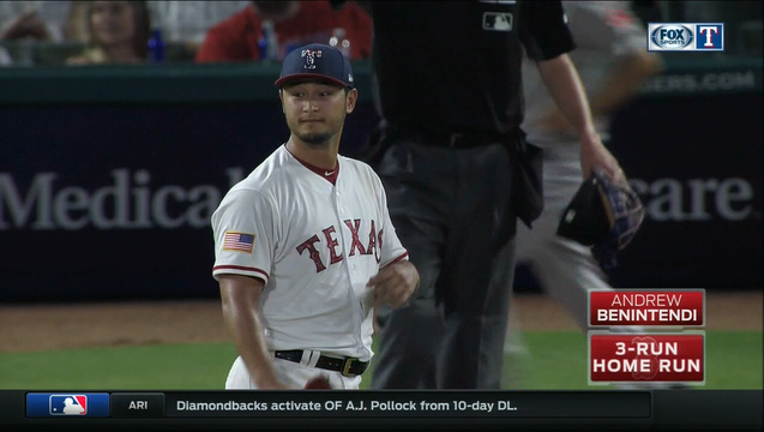 Benintendi homered twice in a five-hit game, drove in six runs and made a spectacular catch in left field - backing up six-plus scoreless innings by David Price - as Boston stretched the longest winning streak in the majors to six games with an 11-4 victory over the Rangers on Tuesday night.

"Huge night," manager John Farrell said. "Offensively, obviously the five base hits, the two homers. He makes one heck of a catch at a pivotal time going up against the wall."

The first Red Sox rookie with two five-hit games in a season, Benintendi had a three-run homer in the fifth that chased All-Star pitcher Yu Darvish (6-7), who matched career highs by allowing seven runs and 11 hits.

Benintendi led off the eighth by going the opposite way for his 12th homer, with the ball hitting on top of the 14-foot wall down the left-field line. Jackie Bradley Jr. followed with his 11th home run.

"The win, that's what I liked the most," Benintendi said.

A night after his two-run, bloop single in the 11th inning was the difference in a 7-5 win, Benintendi put the Red Sox up to stay with a dribbler through the middle of the infield for an RBI single in the second.

"To see one kind of fall like that, it kind of built me up a little bit," Benintendi said, referring to his decisive hit Monday. "It definitely doesn't hurt."

Price (4-2) struck out nine while throwing 70 of 106 pitches for strikes in his eighth start since missing the season's first seven weeks with an elbow strain. The lefty departed after his second walk started the seventh.

"He had all of his pitches working," Farrell said. "He was able to get quite a few number of swing-and-misses."

Adrian Beltre has 2,974 career hits after a three-hit night for Texas that included his 600th career double . Mike Napoli went deep for the fourth straight game, his 18th homer being a three-run drive in the eighth after the Rangers trailed 11-0, and before Delino DeShields homered to start the Texas ninth.

Napoli also had a deep drive in the fourth, but Benintendi ran a long way, leaped and extended his glove to make the catch before hitting the padded left-field wall while still in the air.

Darvish, selected Sunday to his fourth AL All-Star team, struck out four with no walks while his season ERA rose from 3.11 to 3.56 over 4 1/3 innings.

"All the bloopers and then all the ground balls that I thought I'd get an out found a hole and that became a hit. I think momentum went their way," Darvish said through a translator. "The home run and the double I gave up (to Benintendi), I just didn't locate my pitches."

Benintendi scored for the first time after a single in the second by No. 9 hitter Tzu-Wei Lin. That was the first career RBI for the Taiwan-born player , who added another RBI single in the fourth to put Boston up 4-0.

THAT'S A LOT OF HITS

The Red Sox finished with 19 hits, two short of their season high and matching the most allowed by Texas. The bottom four batters in their lineup were 8 for 9 against Darvish, while the top four went 1 for 12.

HE SLIDES - AND MAKES THE CATCH

All-Star outfielder Mookie Betts went 0 for 6 and was the only Red Sox starter who didn't reach base. But the right fielder had a defensive highlight. He ran about 120 feet to make a sliding catch on his knees in foul territory on Robinson Chirinos' popup to end the second inning.

The Rangers' seventh loss in nine games took 3 hours, 56 minutes to play. ... Boston also beat the Rangers on the Fourth of July last year, a 12-5 win at Fenway Park when every Red Sox player had a hit and scored a run.

Red Sox: SS Xander Bogaerts was back in the lineup after missing two games with tightness in his groin. He finished 0 for 5 with a walk.

Rangers: RHP Jeremy Jeffress, who hasn't pitched since June 20 because of a lower back muscle strain, was activated from the DL without a rehab assignment. RHP Ernesto Frieri, the loser Monday, was designated for assignment.

The Red Sox go for a sweep of the season series when RHP Doug Fister (0-1) makes his third start since being claimed off waivers from the Angels. RHP Andrew Cashner (3-7) was struck in the stomach and forearm by a shattered bat when he last pitched Thursday for Texas