Carlson's fifth field goal came after Brown was called for interference on Zay Jones on third-and-18. All four of Brown's interference penalties came on third-down incompletions.

The Raiders (6-5) ended a three-game losing streak with their first Thanksgiving victory since 1968. It was their fourth appearance on the holiday since then, with the previous two losses coming at the Cowboys.

Carlson put Las Vegas ahead 33-30 with a career-long 56-yarder with 1:52 remaining. Greg Zuerlein, who missed an extra point after the first Dallas TD, answered with a 45-yarder with 19 seconds to go.

Tony Pollard had a 100-yard kickoff return for Dallas in the third quarter, but was stopped inside the 15 to start overtime. The Cowboys went three-and-out starting from their 7, and the Raiders finished off the third victory for the AFC West against the NFC East-leading Cowboys (7-4) in the past four games.

Brown had his back to Jones when Derek Carr threw the pass with Las Vegas at its 43. The penalty put the Raiders at the Dallas 24, and the winning kick came after Dallas was penalized twice for rushing past the line of scrimmage before the snap. 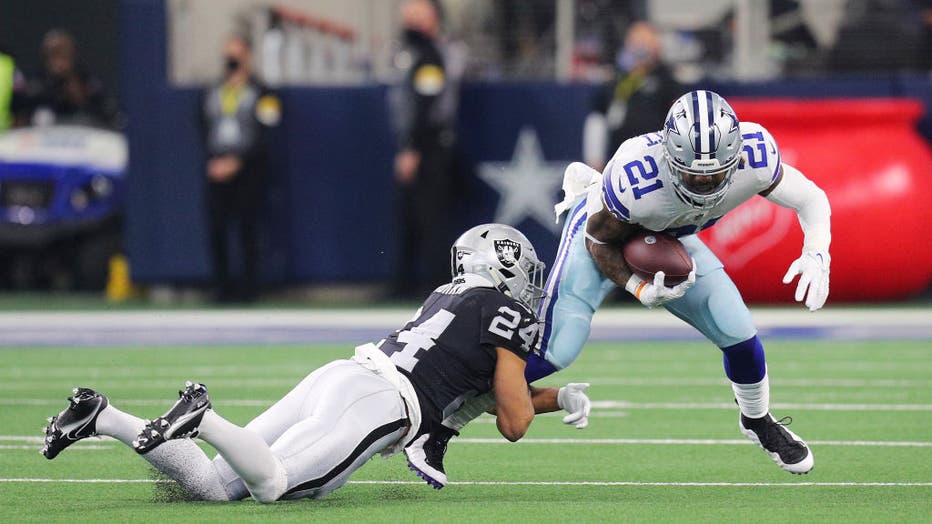 Carr threw for 373 yards, including a 56-yard touchdown strike to DeSean Jackson. Marcus Mariota had a short scoring run on a shotgun keeper.

Dak Prescott had 209 of his 375 yards passing in the fourth quarter. His 32-yard touchdown pass to Dalton Schultz and 2-point conversion toss to the tight end pulled the Cowboys even at 30 with 2:54 remaining after they trailed almost from the start.

Jackson tip-toed successfully on the sideline to open the scoring and drew one of the interference penalties against Brown in the end zone to set up Josh Jacobs' 1-yard TD.

Sean McKeon had his first career touchdown, a 10-yard catch for the Cowboys' first points. Elliott, who was limited to nine carries for 25 yards, had a 1-yard TD. 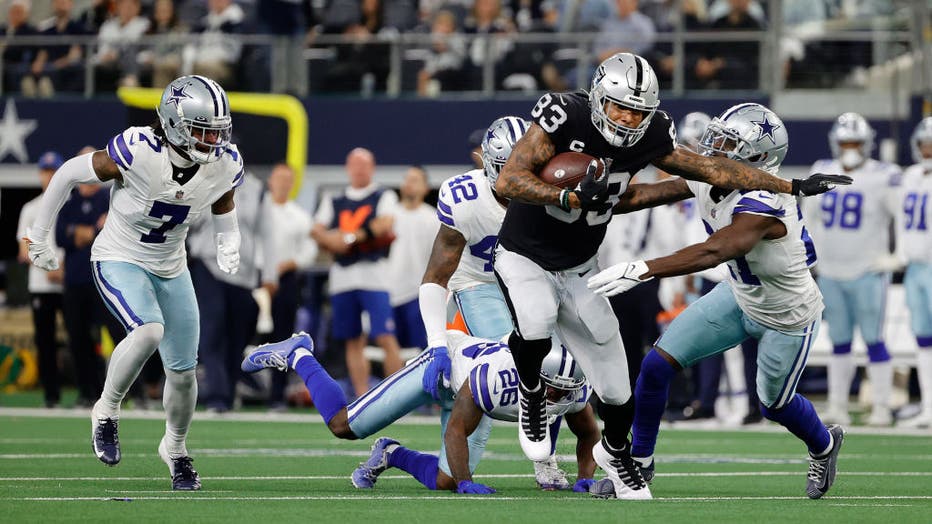 ARLINGTON, TEXAS - NOVEMBER 25: Darren Waller #83 of the Las Vegas Raiders makes a reception during the second quarter of the NFL match between Las Vegas Raiders and Dallas Cowboys at AT&amp;T Stadium on November 25, 2021 in Arlington, Texas. (Ph

Kelvin Joseph of Dallas and Roderic Teamer of the Raiders were ejected after getting personal foul penalties at the end of a Las Vegas punt on the first possession of the second half. Field judge Tom Hill ended up with a small cut on his chin during the fracas on the Raiders' sideline.

It was the second consecutive week the Cowboys had a run-in with the opponent during a punt. And the rookie Joseph ended up with the rest of the game off a week after staying home for personal reasons.

Jackson, who spent the first six of his 14 years with Philadelphia, has six career TD catches against his former NFC East rival. Five of those have covered at least 56 yards, including a 91-yarder with the Eagles in 2010 and an 81-yarder in his second stint with Philadelphia last season.

Raiders TE Darren Waller was ruled out after leaving the game twice, first with a back injury and then a knee issue. ... DE Carl Nassib also injured a knee and didn't return, while CB Brandon Facyson.

Raiders: Another NFC East opponent, this time at home against Washington on Dec. 5.

Cowboys: At New Orleans next Thursday. It's the sixth time in eight seasons Dallas has followed Thanksgiving with another Thursday game.