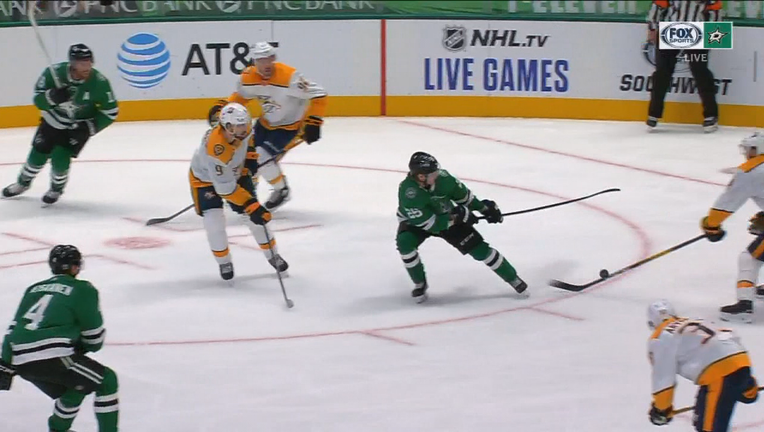 The goalie then stopped 34 shots in his first season-opening start, and Dallas scored five power-play goals in a 7-0 win over the Nashville Predators on Friday night.

"First game, it was emotional at the start," said Khudobin, who later heard his name chanted by the 4,214 fans in attendance for what was his 100th career regular-season win and ninth shutout. "Unbelievable. ... That was a special moment."

Joe Pavelski had two goals and two assists and Alexander Radulov also scored twice for the Stars, who had a scoreless first period. Joel Kiviranta had a goal and an assist.

Five of Dallas’ goals came in the second, including three on the power play and an unassisted short-handed wrist shot by Esa Lindell.

"Too many easy shots got through and they made some nice tip plays, credit to them in that situation when they made them," Nashville coach John Hynes said.

"We were little out of sorts in that first period, which was to be expected, but we played through it, and Doby made the big saves," Stars coach Rick Bowness said. "It was the power play that got us going in the second ... 5-on-3, and then get another quick one. That gave everyone a huge boost."

The Stars were the last NHL team to open the season after their first four games, all scheduled on the road, were postponed because 17 players tested positive for COVID-19 during the abbreviated training camp. Only veteran forward Blake Comeau was unavailable for the first game because of COVID protocols, though the league doesn't specify the exact reason.

Nashville (2-2) played for the first time since Monday, a day before its second of back-to-back games against Carolina was postponed because of virus issues for the Hurricanes.

"The scoreboard looks bad. At the end of the day, we got zero points, that's all that matters," Predators forward Filip Forsberg said.

Dallas was at home for the first time in 318 days, since a 4-2 loss to the New York Rangers on March 10 that was its sixth loss in a row. When the season resumed months later with the playoffs in the NHL bubble in Edmonton, the Stars reached their first Stanley Cup Final since 2000 before losing in Game 6 against Tampa Bay.

The fans in attendance were spread out in an arena where the normal hockey capacity is 18,532. The NBA's Dallas Mavericks are playing their home games at American Airlines Center without fans.

Khudobin had never started a playoff game before going 14-10 last summer when Ben Bishop was unavailable because of a torn meniscus in his knee. Bishop is still rehabbing from offseason surgery.

After becoming a free agent, Khudobin quickly re-signed with Dallas for $10 million over three seasons. He had never started an opener in his 11 previous NHL seasons.

Radulov had the primary assist on Pavelski’s shot from a knee in front of the left circle with a 5-on-3 advantage for the first goal. The Stars were still on the power play 1:26 later when Pavelski took a shot and Radulov, with his back to the net, redirected the puck through his legs and past goalie Jusse Saros.

After Denis Gurianov scored on another power play, Radulov put Dallas up 4-0 when he got up from behind the net and had a backhanded swipe of his stick to get his second goal, this one at even strength.

Pavelski and Kiviranta added power-play goals in the third period, those against Pekka Rinne, who entered after Saros allowed five goals on 20 shots.

Stars captain Jamie Benn was injured when his right leg buckled awkwardly after a collision with Viktor Arvidsson in the second period. Benn had to be helped before walking gingerly down the tunnel. He was back on the ice a few minutes later for Gurianov's power-play goal, but didn't return in the third period. Bowness provided no update afterward, except to refer to it as a lower-body injury.

Predators center Mikael Granlund made his season debut, after a weeklong quarantine and only one practice since returning from his home in Finland. He had four shots while playing nearly 18 minutes. Three of the shots game in the first period, including a wraparound attempt into Khudobin’s pads and a hard second shot on the rebound.

"Hs pace of play was good, his conditioning was good. He looked like he was certainly ready to play, and prepared to play," Hynes said. "He knows the system and he knows the structure. He jumped in and had a good first game."

The teams play again in Dallas on Sunday night, the second of four home games in a row for the Stars.