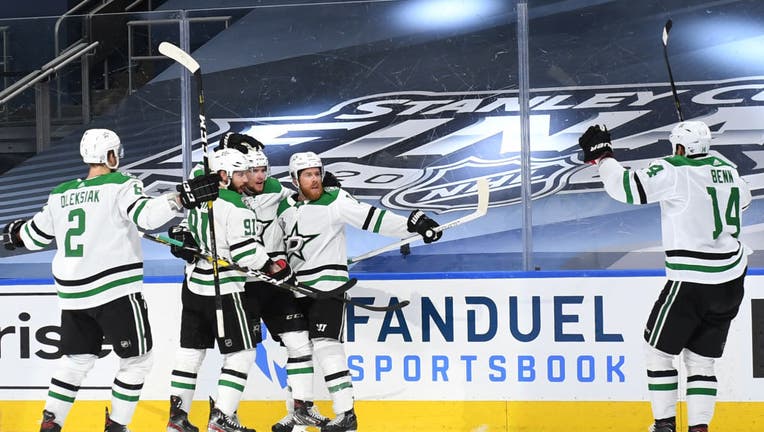 Joe Pavelski #16 of the Dallas Stars celebrates with Miro Heiskanen #4, Tyler Seguin #91, Jamie Benn #14 and Jamie Oleksiak #2 after Pavelski scored in the third period of Game Five of the 2020 NHL Stanley Cup Final between the Dallas Stars and the T

Pavelski tied it 6:45 left in the regulation, laid out to block a shot in the first overtime before Perry scored the winner in double OT and the Dallas Stars avoided elimination Saturday night by beating the Tampa Bay Lightning 3-2 to force a Game 6 in the Stanley Cup Final.

“Get one, keep going,” Perry said. “We start building here and I think we’re starting to do something special.”

Anton Khudobin made 39 saves, and Perry prolonged the series by scoring 9:23 into the second overtime. It was a manner of redemption for the Stars a night after they lost in OT on a questionable penalty call when Tampa Bay scored on the ensuing power play. Game 6 is Monday night.

The Stars did it despite going down to five defensemen for half of regulation when Andrej Sekera was injured blocking a shot midway through the first. Sekera returned for the third, a gutty performance that may have saved a team that looked to be running on fumes.

Dallas might have to dip even further into its already depleted depth in Game 6 if Sekera’s injury is severe enough to add him to the already long list of unavailable players. Forward Roope Hintz was the most recent to join that group when he was injured crashing into the boards Friday night.

The Stars didn’t have much time to regroup after that difficult loss with the first back to back in the final since 2009 and just the second since the mid-1950s. Instead of the fatigue wearing them down, they were able to respond in a big way against a healthier opponent.

Pavelski again led the way. In the final for the second time in his career after losing in 2016 with San Jose, the 36-year-old followed his two-goal performance in Game 5 with a season saver 24 hours later by scoring on a rare juicy rebound allowed by Andrei Vasilevskiy.

The goal tied Pavelski with Tampa Bay’s Brayden Point for the most goals this postseason with 13. It was the 61st of his playoff career, the most among Americans.

Asked Friday night about tying that record, Pavelski deadpanned: “Keep it. Next question.” Thanks to another strong performance from him and fellow veteran Corey Perry, there will be plenty more questions going into Game 6 Monday.

Some of those belong to Tampa Bay, which blew a 2-1 third-period lead and lost for just the third time in one-goal games this postseason. How to contain a suddenly dangerous Dallas top line led by Pavelski, along with Perry, is one of them.

Another is the health of defenseman Ryan McDonagh, who was slow to get up after a big hit in the first OT. That was around the same time Pavelski blocked a point-blank shot by Point to keep the game going.

Perry finished it by putting a rebound home for his second of the game.

Monday night will mark just the second Game 6 the Lightning play in the playoffs after finishing their first two series out in five each.