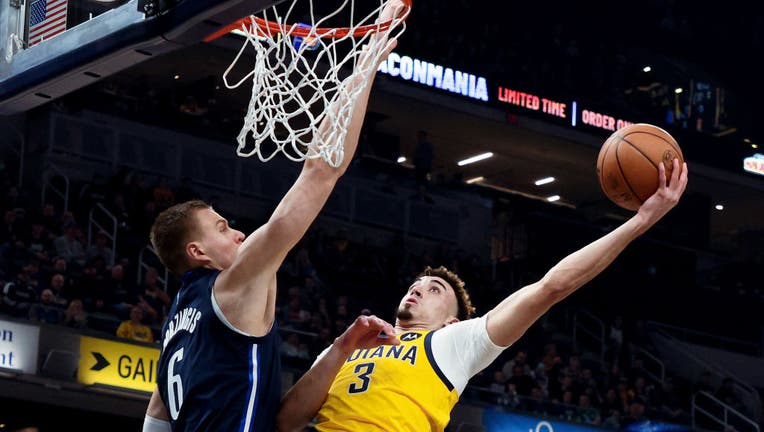 INDIANAPOLIS, INDIANA - DECEMBER 10: Chris Duarte #3 of the Indiana Pacers attempts a shot while guarded by Kristaps Porzingis #6 of the Dallas Mavericks in the first quarter at Gainbridge Fieldhouse on December 10, 2021 in Indianapolis, Indiana. NOT

They stuck to the game plan, with Caris LeVert scoring 26 points and Domantas Sabonis adding 22 points and 10 rebounds to lead the Pacers 106-93 over the Dallas Mavericks.

"I just talked to Rick and I said ‘We got one for you'" Pierce said of Carlisle, who entered the health and safety protocols Thursday after testing positive for COVID-19. "... Look, this game could have gone anywhere, trust me, but they locked in and decided to be Indiana."

It hasn't been an easy week, but winning a season-best third straight certainly could help the Pacers settle down and perhaps settle in for however long Pierce needs to serve as the replacement. Carlisle was supposed to be facing the team he coached for the previous 13 seasons, led to its only NBA championship and finished as their career-leader in wins.

Until Indiana's final push, it was a back-and-forth game, with Luka Doncic falling just short of his 39th career triple-double. Doncic led the Mavericks with 27 points, nine rebounds and nine assists while Kristaps Porzingis added 22 and the Mavericks shot a season low 14.3% from 3-point range.

"It sucks right now to be us," Porzingis said of Dallas, which has lost four of five. "We're fighting and the only thing I can see for us to clean up those things and we'll get out of this."

The Pacers led most of the final three quarters, but Dallas used a 13-4 run to jump out to an 80-75 lead late in the third quarter. Indiana answered with the final seven points of the third and the first five of the fourth to make it 87-80.

Dallas countered with seven straight to tie the score at 87. But Kelan Martin's with a 3-pointer with 8:21 left gave the Pacers the lead for good and they spent the rest of the game pulling away.

Mavericks: Tim Hardaway Jr. scored 15 points and Jalen Brunson finished with 14. ... The Mavericks were just 2 of 13 from 3-point range in the first half and wound up 4 of 29. ... Doncic appeared to aggravate his injured left ankle during the second half but finished the game. ... Dallas played again without Sterling Brown (left foot) and center Willie Cauley-Stein (personal matter).

Mavericks coach Jason Kidd thanked Carlisle for his endorsement months ago. He just wanted a chance to shake Carlisle's hand and tell him face to face, but Carlisle's absence will likely postpone it until Jan. 29 when he returns to Dallas for Indiana's only other meeting against the Mavs this season.

Myles Turner tried to clarify comments that appeared in The Athletic this week, which prompted some to speculate he was seeking a trade. Turner said what he wanted most was clarity about his role.