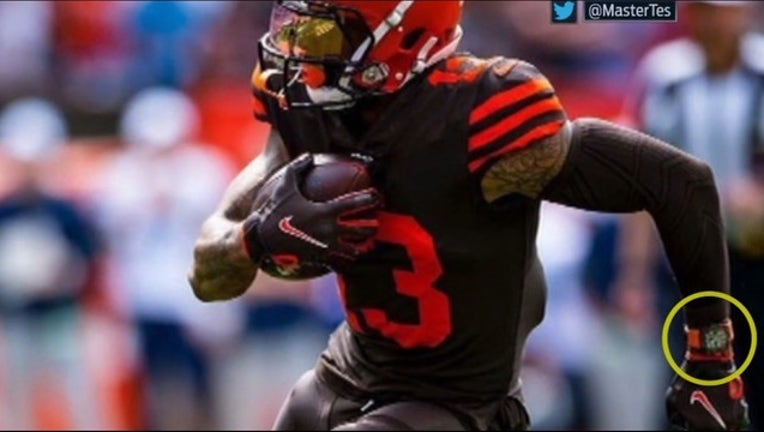 The league reached out to the Browns on Monday and told them that their star can no longer wear a watch on the field after he sported an expensive one during Sunday's season opener against Tennessee.

The flashy, fashionable wide receiver wore an orange Richard Mille-designed watch - which retails for more than $250,000 - during the Browns' 43-13 loss to the Tennessee Titans.

On Monday, league spokesman Michael Signora said while there are no rules prohibiting jewelry, there is a policy "prohibiting hard objects."

Browns coach Freddie Kitchens said he was not aware that Beckham had on the lavish time piece. Kitchens also said the team will abide the rules.

"As long as they're going to enforce that with everyone, I'm fine with it," Kitchens said. "Let's just make sure it gets enforced with everybody."

It's not clear if Beckham spoke with anyone from the league or if he will be fined for his fashion faux pas.

Beckham, who came to Cleveland in a blockbuster offseason trade from the New York Giants, caught seven passes for 71 yards in his first action for the Browns.

Known for his style and one-handed catches, the 26-year-old Beckham drove his customized, orange Rolls Royce to FirstEnergy Stadium for Sunday's game.

Beckham will return to New York next week as the Browns play the New York Jets on Monday night.