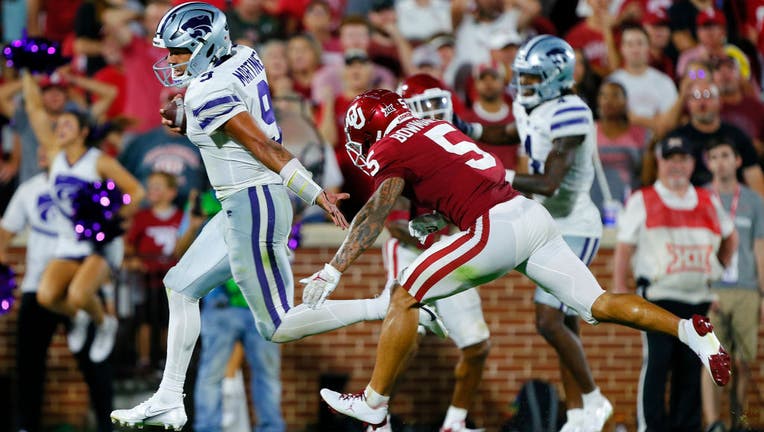 NORMAN, OK - SEPTEMBER 24: Quarterback Adrian Martinez #9 of the Kansas State Wildcats stiff arms his way to a 15-yard touchdown against defensive back Billy Bowman Jr. #5 of the Oklahoma Sooners in the fourth quarter at Gaylord Family Oklahoma Memor

Quarterback Adrian Martinez ran for 148 yards and four touchdowns, and the Wildcats stunned No. 6 Oklahoma 41-34 on Saturday night.

"I just know that our kids believe that they’re a good football team, and they have to go out there and prove it," Kansas State coach Chris Klieman said. "And tonight, they proved it."

Martinez also passed for 234 yards and a score. He was Nebraska’s quarterback last year when the Cornhuskers lost to Oklahoma 23-16 in the same stadium.

Martinez, a senior, said it was his best college performance.

It was first-year Oklahoma coach Brent Venables' first loss as a head coach, and it came against his alma mater.

"I don’t think that we played, obviously, like we have these first three weeks," he said. "It starts with the man in the mirror and it starts with us as coaches. Obviously, we did a poor job of getting our guys ready to play. Obviously, we didn’t handle success very well. Sometimes, it’s just the other team. They just outplayed you, outcoached you."

Kansas State broke out to a 14-0 lead about nine minutes into the game behind Martinez's 6-yard touchdown run and 6-yard scoring pass to Malik Knowles.

"I think coming out really fast helped us as a unit," Martinez said. "Immediately, we knew we could score on these guys."

Martinez scored his third touchdown run of the game from 15 yards out to put Kansas State up 34-20 with 8 minutes to play.

Gabriel found Brayden Willis for a 1-yard touchdown pass with 4:36 remaining to cut Kansas State's lead to 34-27. But on the Wildcats' next possession, Martinez broke loose for 55 yards on a third-and-16. He finished the drive with a 1-yard scoring run — his fourth touchdown rushing of the game.

"They onside kicked it to the kid that’s got the best hands on our team in Kade Warner, and I felt pretty good," Klieman said. "When he recovered that, I was like, ‘Wow. We’re going to beat these guys again here.’ It’s amazing to do this two times in a row here."

Kansas State: The Wildcats showed resilience and found a way to once again win in Norman — just as they did in 2012, 2014 and 2020. They beat up a defense that had allowed just 30 points in its first three games.

Oklahoma: The Sooners' defense, which was tough during nonconference play, surrendered 509 total yards and 275 yards rushing. The Sooners committed 11 penalties for 87 yards, including five false starts.

The Sooners missed an opportunity to climb, with Clemson going two overtimes before holding off Wake Forest and Michigan having trouble before defeating Maryland. They'll likely take a steep drop.

NFL Hall of Fame quarterback Kurt Warner’s sons had quite the day.

E.J. Warner got his first win as a college starting quarterback. He completed 11 of 22 passes for 173 yards and two touchdown passes to lead Temple to a 28-0 victory over Massachusetts.

Kade Warner then caught three passes for 26 yards against Oklahoma and secured the onside kick.

Oklahoma dedicated a statue honoring the Selmon brothers — defensive linemen Lucious, Dewey and Lee Roy. The trio starred for Oklahoma from 1971 through 1975 and helped the Sooners compile a 54-3-1 record with national championships in 1974 and 1975 and four Big Eight titles. All three started on the defensive line in 1973. Lee Roy passed away in 2011, but Lucious and Dewey were present.