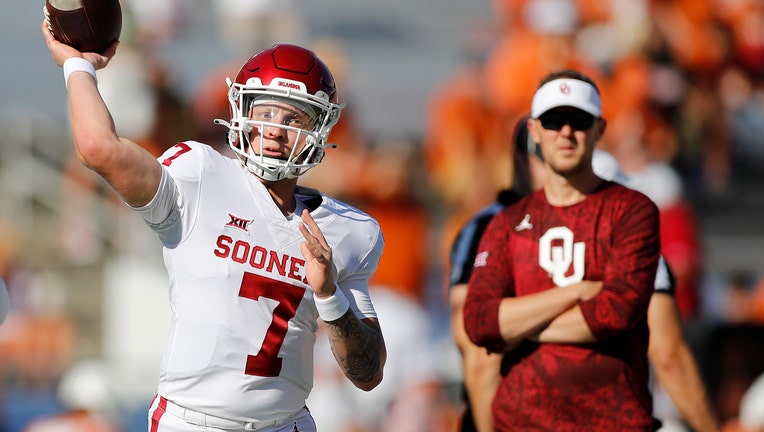 DALLAS, TEXAS - OCTOBER 09: Spencer Rattler #7 of the Oklahoma Sooners warms up before the game against the Texas Longhorns during the 2021 AT&amp;T Red River Showdown at Cotton Bowl on October 09, 2021 in Dallas, Texas. (Photo by Tim Warner/Gett

This year’s was much more complicated.

Last year, Rattler had two early turnovers against the Longhorns and was replaced by Tanner Mordecai, but he re-entered the game and rallied the Sooners to a 53-45 win in four overtimes.

This year, the preseason first-team AP All-American again was benched after two early turnovers. Oklahoma coach Lincoln Riley went to true freshman Caleb Williams, who rallied the sixth-ranked Sooners to a 55-48 win over the 21st-ranked Longhorns.

Rattler returned for one play — a 2-point conversion pass that he completed to Drake Stoops in the fourth quarter.

Williams, a five-star recruit from Washington who fans chanted for when Rattler struggled against West Virginia, connected on 15 of 24 passes for 211 yards and two touchdowns with no interceptions against Texas. He also ran for 88 yards on four carries, including a 66-yard touchdown run. Rattler completed 9 of 16 passes for 112 yards, with no touchdowns and an interception against the Longhorns.

Riley did not commit to a starter for Saturday’s game against TCU.

"I’m surprised it took 10 questions to get that," Riley joked when asked if was prepared to reveal who would start against the Horned Frogs. "No, I’m not ready."

Rattler was replaced after a fumble in the second quarter while Oklahoma trailed 28-17. Texas scored three plays later, and Riley made the move.

Riley said he still has confidence in Rattler, as evidenced by putting him in for the 2-point conversion to Stoops that tied the game at 41 with 7:25 remaining.

"I have confidence in both guys," Riley said. "Otherwise, I wouldn’t have played Caleb a bunch like I did and I wouldn’t have put Spencer in on the single most important play of the game. So high confidence with how they both handled it. I felt like they were both ready to play, and like I said, we just got on a run and I decided to stay with Caleb."

Riley said he gave serious thought to reinserting Rattler. With the score tied at 48 and 1:23 remaining, Oklahoma got the ball with a chance to win. Rattler had led the Sooners down the field to set up a game-winning field goal against West Virginia. Asked whether he thought about putting Rattler in for the final drive, Riley said he "considered it a lot."

In the end, Riley trusted his instincts and stayed with Williams and his hot hand. Williams marched the Sooners into field-goal range before Kennedy Brooks broke loose for a game-winning 33-yard touchdown run with 3 seconds remaining.

"He stayed engaged," Mims said. "He took it like a team leader. He’s one of our captains and we didn’t make him captain just because he’s the starting quarterback. That’s who the guy is. He’s a huge leader. Caleb went in and he supported Caleb, he supported everybody else. Kept talking to us and all that stuff, and that’s what we need out of him, you know what I mean? He’s a team leader, he’s a team captain. So that was huge for us."