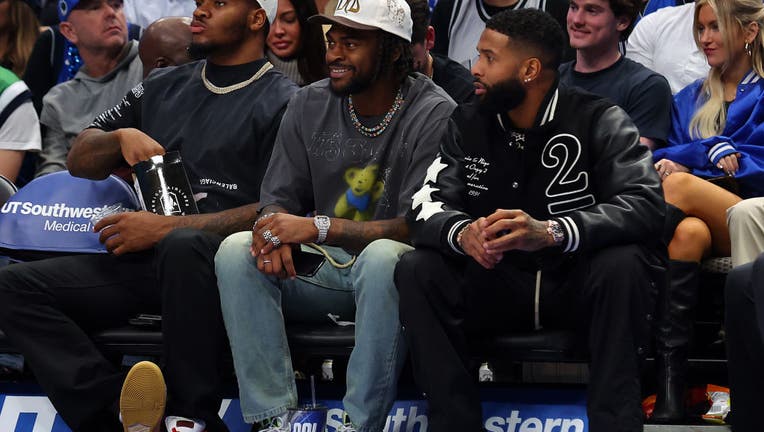 DALLAS - The Dallas Cowboys will spend another day trying to convince a free-agent wide receiver to join the roster.

Odell Beckham Jr. helped the Rams win the Super Bowl last season. Now, the Cowboys want him to do the same thing for Dallas.

After Beckham arrived in North Texas Monday, he met with the Cowboys’ medical staff and underwent a physical at The Star in Frisco.

He is recovering from a torn knee ligament he suffered in Super Bowl 56 back in February.

Then, the three-time Pro Bowler sat courtside with Cowboys players Micah Parsons and Trevon Diggs to watch the Mavs’ big win against the Suns.

Beckham declined to discuss his visit with reporters when he arrived at the American Airlines Center.

But when he was shown on the jumbotron, the crowd went crazy chanting "O-B-J." Beckham smiled and shrugged at the camera.

"I would say recruit him. Obviously, he's been to two other teams. So, I think just like in anything in this situation it’s clearly unique because of the timing of it. I’ve never been part of something like this, this late in the season. But I’m glad he's here, so we will see how it goes," McCarthy said.

Last week, Beckham met with the Buffalo Bills and the New York Giants.

He is set to meet with the Cowboys leadership council on Tuesday. That’s a players-only group headed by quarterback Dak Prescott.

Once he signs with a team, it’s still not clear how soon he’d be able to play.