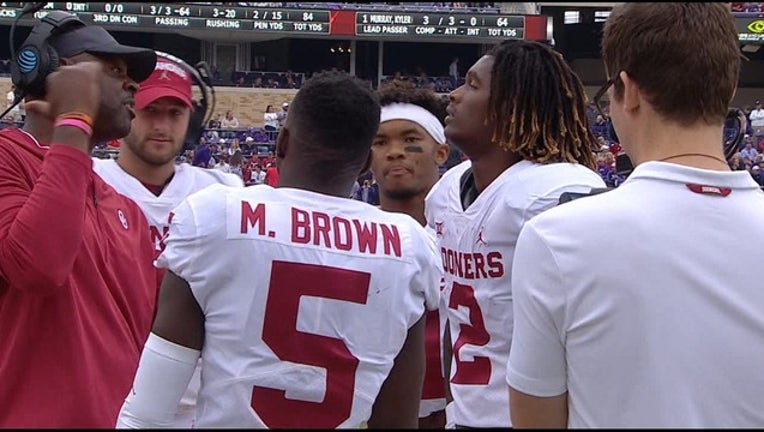 He cares about the Wildcats' last game.

Riley saw plenty to worry about in Kansas State's 31-12 win over Oklahoma State two weeks ago. The Wildcats looked like a typical Bill Snyder-coached team, rushing for 291 yards on 55 carries. Riley feels his eighth-ranked Sooners (6-1, 3-1 Big 12) are in for a battle on Saturday.

"I mean, you feel like you say it every year, which is a big compliment to them: Coach Snyder does a tremendous job each year," Riley said. "New faces - they've got two new coordinators this year. They've got some changes, but their program is still so steady, so solid."

Kansas State (3-4, 1-3) had nearly 38 minutes of possession against Oklahoma State, a bad sign for an Oklahoma team that has had trouble at times getting its defense off the field. Army had the ball for more than 44 minutes in a game the Sooners won in overtime last month.

"They (Army) had the ball as long as they did because they were getting first downs," Snyder said. "It was interesting to watch the game because their gains were one to five yards on offense. They were so consistent about it and successful doing it."

Kansas State's Alex Barnes, the Big 12's leading rusher, likely will test the Sooners often. The junior ran for 250 yards and three touchdowns against Baylor, then 181 yards and four touchdowns to go with 51 yards receiving two weeks ago against Oklahoma State.

But the Sooners hope they have shored up their weaknesses now that interim defensive coordinator Ruffin McNeill is calling the shots instead of the fired Mike Stoops. In their first game under McNeill, the Sooners held TCU to 275 total yards. Riley said the transition to McNeill after the Texas game and during the bye week leading up to the TCU game was seamless.

The Sooners had struggled at times with their ground game since losing all-conference back Rodney Anderson to a season-ending injury in the second game of the season. Now, they have a productive duo in freshman breakaway threat Kennedy Brooks and sophomore power runner Trey Sermon. Brooks ran for 168 yards in a 52-27 win over TCU while Sermon ran for 110.

Kyler Murray is Oklahoma's most successful running threat at quarterback since its wishbone days under Barry Switzer. Murray has rushed for 428 yards this season, the most for an Oklahoma quarterback since Charles Thompson ran for 824 yards in 1988.

Oklahoma's inside linebackers have been busy. Kenneth Murray leads the Big 12 in tackles with 12.0 per game in league play, while Curtis Bolton is second with 11.0. Murray's 12.1 tackles per game for the entire season rank 10th nationally, while Bolton's 11.6 per game overall rank 11th.

Kansas State defensive back Duke Shelley has three interceptions this season - all in the last two games - to rank third in the Big 12 and 13th in the country. The senior has 12 total passes defended to rank second in the Big 12 and eighth in the nation.

Kansas State enters the game as a more than three-touchdown underdog.

"I'm not one to fortify all the thoughts that we're a thousand-point underdog," Snyder said. "As I try to share with our players, and I believe it sincerely, it's not about who we play, it's about us. If we prepare well and play as well as we prepare, it doesn't make any difference who you play, you've always got a good chance."

This story has corrected statistics for Bolton and Murray.