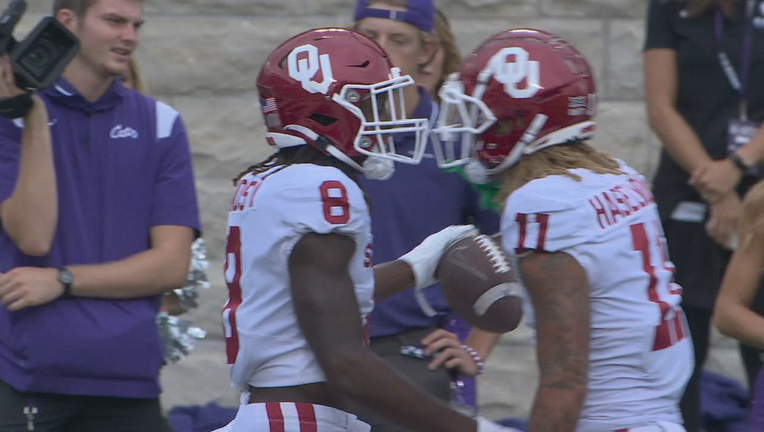 MANHATTAN, Kan. (AP) - Spencer Rattler threw for 243 yards and two touchdowns, Oklahoma had two crucial calls overturned in its favor after video reviews, and the sixth-ranked Sooners recovered an onside kick with just over a minute left to hold off Kansas State 37-31 on Saturday.

Kennedy Brooks added 91 yards rushing and a touchdown, and Jeremiah Hall reached the end zone twice, as the Sooners (5-0, 2-0 Big 12) overcame a slew of penalties on their offensive line to beat the Wildcats for the first time in three tries.

Skylar Thompson returned from a knee injury to throw for 320 yards and three scores for the Wildcats (3-2, 0-2). Deuce Vaughn had 51 yards rushing to go with 10 catches for 104 yards and a score, and Malik Knowles returned a kick 93 yards for a touchdown with 1:20 remaining for the final margin.

Earlier in the second half, the Sooners twice had to sweat out video reviews.

The first came when Kansas State recovered an onside kick trailing 27-10 in the third quarter, and referee Kevin Hassell went to confirm the ball traveled 10 yards. It did, but the Sooners challenged the play again, contending kicker Ty Zentner had accidentally kicked the ball twice -- which he also did. The illegal touching gave Oklahoma the ball.

The second review came after the Wildcats got the ball back trailing 27-17 in the fourth. Landry Weber was ruled to have caught a pass converting fourth down, but the ball had clearly hit the ground and another play was overturned.

Hall scored his second TD on a shovel pass a few minutes later to help Oklahoma put away the game.

Thompson had not played since the second game of the season, when he hurt his knee while trying to block for Vaughn against Southern Illinois. And while coach Chris Klieman called it "unlikely" that his star would play against the Sooners, it became clear during warmups that it had become quite certain.

With their sixth-year senior under center, the Wildcats moved the ball efficiently for the first time in weeks. And after backup running back Jacardia Wright coughed up the ball to end their first drive, they reached the end zone a few minutes later to take a 7-3 lead -- their only one of the game.

The Sooners answered with a 75-yard drive of their own that Hall ended with a short TD run, and the teams swapped field goals heading into halftime, leaving Oklahoma with a 13-10 lead -- and each team's punter a little bit bored.

In fact, nobody punted until Oklahoma forced one midway through the third quarter.

Oklahoma squeaked through another close game despite allowing three fourth-down conversions, committing 10 penalties for 85 yards and twice putting the ball on the ground; the Sooners recovered both fumbles.

Kansas State got a big lift from Thompson on offense, but the defense struggled again to get off the field. Oklahoma only faced seven third downs, converting four, and was 6 for 6 scoring in the red zone.

Oklahoma heads to Dallas to face Texas in the Red River Shootout next Saturday.

Kansas State gets next week off before playing Iowa State on Oct. 16.