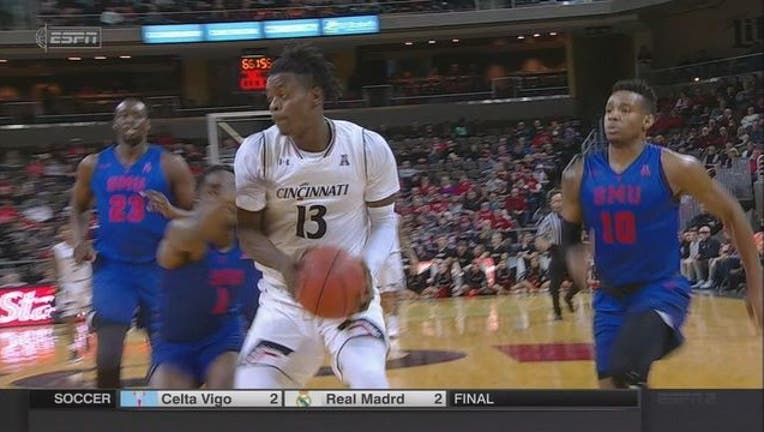 HIGHLAND HEIGHTS, Ky. (AP) - Jacob Evans III scored 18 points, and Gary Clark had a big second half as No. 19 Cincinnati pulled away to a 76-56 victory over SMU on Sunday, extending the longest active home-court winning streak in the country.

The game matched the American Athletic Conference's top defensive teams, and it showed in the first half as they went a combined 15-for-52 from the field and the Bearcats led 34-20.

Cincinnati (14-2, 3-0) broke it open with a 12-point run late in the first half featuring Evans' 3-pointer. Clark scored 13 of his 18 points in the second half as the Bearcats finally got the ball inside and pushed the lead to 20.

The Bearcats have won 35 straight home games on two courts. They've gone 9-0 while playing this season at BB&T Arena at Northern Kentucky University while their on-campus arena is renovated. They went 18-0 at Fifth Third Arena last season.

SMU: The Mustangs' offense unraveled against Cincinnati's match-up defense. They couldn't get the ball inside - a typical possession involved passing around the perimeter and forcing one up as the shot clock wound down. SMU's 20 first-half points were its fewest in any half this season.

Cincinnati: The Bearcats survived a poor shooting performance for a 55-53 win at Temple on Thursday, managing only three 3-pointers while shooting 39 percent from the field overall. They were even worse in the first half on Sunday, shooting 28 percent and managing only four points in the paint.

The Mustangs host Temple on Wednesday.

The Bearcats begin a two-game Florida swing, playing at South Florida on Saturday followed by a game at Central Florida on Tuesday.