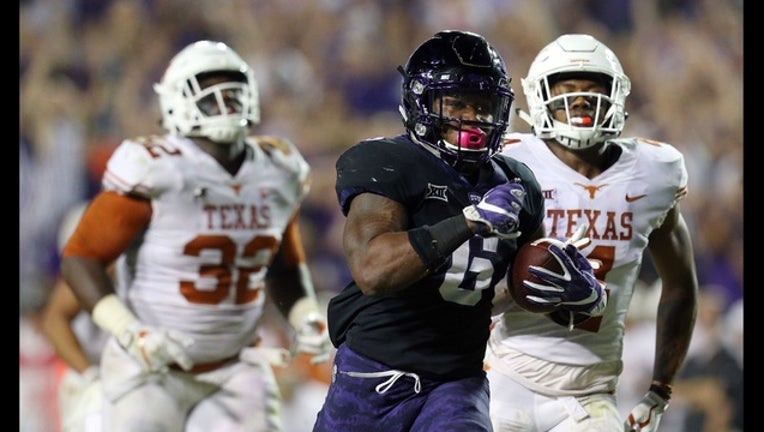 Darius Anderson of TCU is pursued by Malcolm Roach and DeShon Elliott of the Texas Longhorns as he runs for a fourth quarter touchdown at Amon G. Carter Stadium on November 4, 2017 in Fort Worth, Texas. (Photo by Richard W. Rodriguez/Getty Images)

The winner emerges as a top contender for the Big 12 title, which is where TCU thinks it belongs, and Texas is longing to be after years of being a league also-ran. TCU also wants to avoid a second-straight loss after dropping a tough game against No. 4 Ohio State.

Texas linebackers Anthony Wheeler and Gary Johnson against TCU running back Darius Anderson. Wheeler and Johnson have to be able to run with Anderson and prevent the big play. Anderson brings game-breaking speed and a missed assignment or broken tackle could open the field straight to the end zone. Anderson's 93-yard touchdown run last week was the longest play from scrimmage against Ohio State in Buckeyes history.

Texas: S Caden Sterns. The freshman has become a playmaker with an interception and a blocked field goal the last two games and he's already drawing comparisons to former Texas All-American Earl Thomas.

TCU has won four in a row over the Longhorns and is the only Big 12 program Texas hasn't beaten since Mack Brown was forced out after the 2013 season. And they haven't been close games with an average score of 38-8 ... Texas QB Sam Ehlinger was just 15 of 33 passing last week but it included touchdown throws of 47 and 27 yards ... TCU's 38 road wins since 2009 are second in the nation.