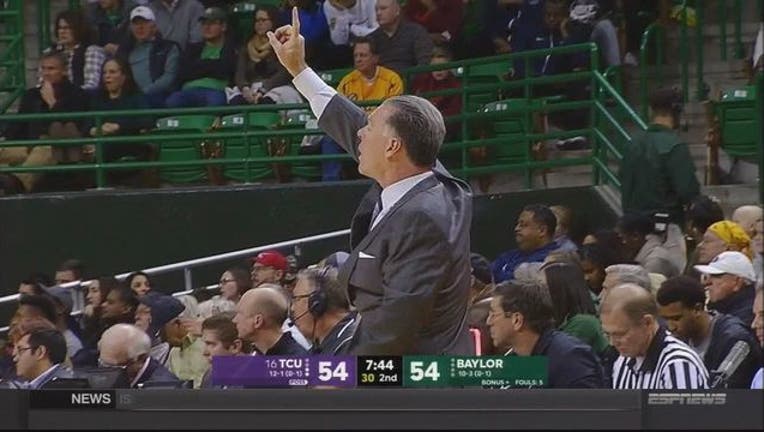 WACO, Texas (AP) - Vladimir Brodziansky had 18 points, including the go-ahead 3-pointer in overtime, as No. 16 TCU bounced back from its first loss with an 81-78 victory at Baylor on Tuesday night.

The Horned Frogs (13-1, 1-1 Big 12), after blowing a 12-point lead in the second half, went ahead to stay on Brodziansky's 3 from the top of the key with 1:29 left in overtime that made it 75-74. They stretched the lead on an inside shot by Kouat Noi, who punctuated the win with a breakaway slam on an inbounds pass from Kenrich Williams, who is from Waco.

Baylor's Jake Lindsey drove for a layup with 17 seconds left in regulation to tie the game at 64. TCU had plenty of time, but Bane's open 3-pointer from the right wing ricocheted off the rim as time ran out.

TCU: While it was the 182nd meeting in the series between the instate rivals, this was TCU's first Big 12 win in 12 tries since the Horned Frogs joined the conference five years ago. ... While the Frogs pulled out the win this time, they blew a double-digit lead after halftime for the second game in a row. They blew a 13-point lead in the second half Saturday in a loss to No. 7 Oklahoma, which ended their school-record 17-game winning streak.

Baylor: The Bears were much more themselves with the 7-foot Lual-Acuil back after he missed the Big 12 opener because of a sprained left foot. After their worst rebounding margin in 10 years, with Texas Tech outrebounding them by 18, Baylor had a 45-34 margin over TCU.

TCU is home to play No. 10 Kansas, their first meeting since the Horned Frogs upset the then-No. 1 Jayhawks in the Big 12 Tournament last March.

Baylor is home Saturday to play Texas, then play five of its next seven games after that on the road through the end of January.