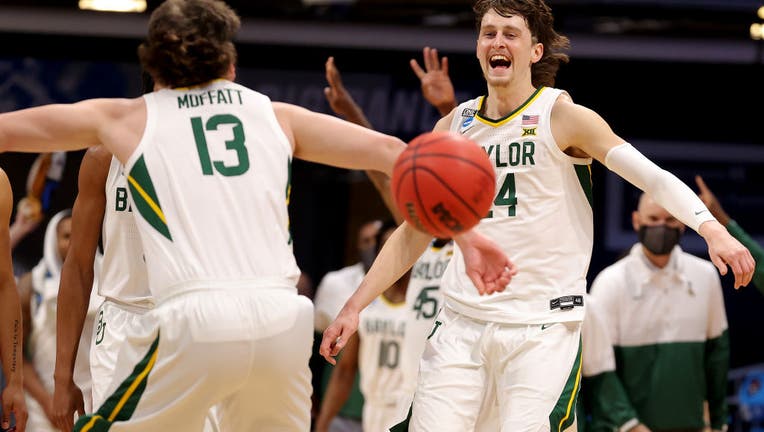 INDIANAPOLIS, INDIANA - MARCH 21: Jackson Moffatt #13 of the Baylor Bears and Matthew Mayer #24 of the Baylor Bears react after their 76-63 win over the Wisconsin Badgers in the second round game of the 2021 NCAA Men's Basketball Tournament at Hinkle

The 2021 bracket has been filled with surprises, the latest by lovable Loyola Chicago over Illinois.

Not long after the Illini became the first No. 1 seed to bow out, the Bears (24-2) looked every bit a Final Four favorite in the first half, smothering Wisconsin with the type of defensive pressure they played before a late-season COVID-19 pause.

The Badgers (18-13) showed a bit of fight after being backed into an 18-point corner, rallying to within seven midway through the second half behind D'Mitrik Trice (12 points).

The Bears answered the run with a dash of more D to reach the Sweet 16 for the fifth time under coach Scott Drew. They'll get Villanova or North Texas next.

The knock on Baylor entering the NCAA Tournament was that the Bears weren't quite as good coming off their second COVID-19 pause as they while were winning the first 18 games of the season.

Dominant Baylor showed up in the opener after a shaky start, hitting 11 3-pointers in a 79-55 win over Hartford.

A short turnaround to prepare for Wisconsin's grinding style is never easy, which countless teams learned during the Bo Ryan years.

These Bears had no trouble on little rest.

Baylor was at its chest-to-chest best on defense, limiting Wisconsin's open looks and jumping into passing lanes to create turnovers. Those led to easy transition baskets, like the alley-oop from MaCio Teague to Mark Vital that had the basket still wobbling as the Badgers set up on offense at the other end.

In the half court, Baylor repeatedly got into the lane, setting up a series of lobs and short-range floaters. When Wisconsin packed it in, the Bears went to the 3, the last by Adam Flagler at the buzzer to put Baylor up 42-29.

Wisconsin showed plenty of fight after being dominated in the first half. The Sweet 16 bid fell short when the shots wouldn't fall down the stretch.

Baylor showed glimpses of the dominating D from its fast start to the season. The Bears let up a little in the second half, but it was plenty good enough to reach the Sweet 16 for the first time since 2017.