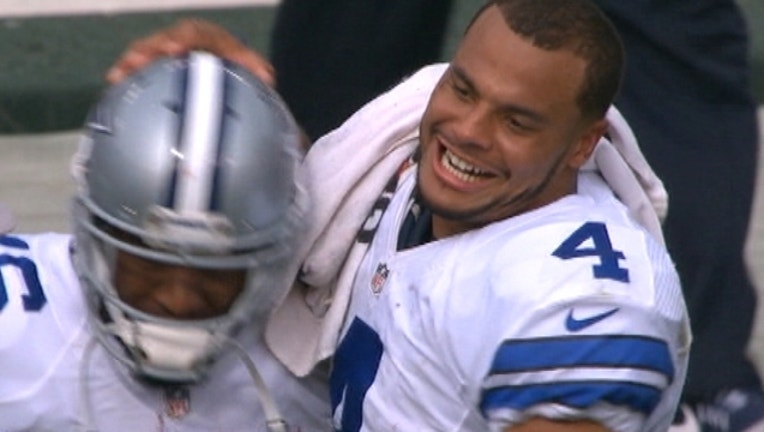 Not bad company for a guy who was a fourth-round draft pick and is only playing because Tony Romo is out with an injured back.

Prescott ran for a 6-yard TD , went 22 for 30 for 292 yards, and showed a veteran's poise in the pocket, helping the Cowboys beat the Washington Redskins 27-23 on Sunday as he stayed turnover-free as a pro so far.

"He exudes confidence," Jones said about Prescott. "He's got a great supporting cast, but he's using it."

Dallas (1-1) won for only the second time in its past 16 games without Romo — and both of those victories came at Washington (0-2).

Alfred Morris scored the go-ahead touchdown on a 4-yard run with under five minutes left against his former club, taking advantage after Washington's Kirk Cousins threw an end-zone interception.

Morris was drafted by Washington in 2012 and played his first four seasons there. But his role was reduced last year and he was allowed to leave as a free agent. His first TD in a Cowboys uniform capped an 80-yard drive that started when Barry Church picked off a pass from Cousins intended for Pierre Garcon.

"This is a quarterback-driven league," Cousins said. "I need to play at a high level, week in and week out."

Through two games, he has three interceptions and only one TD pass , an 11-yarder to Jamison Crowder in the third quarter that gave Washington its first lead, 17-13.

But Cousins and the defending NFC East champion Redskins will rue the second-half chances they wasted. They got the ball inside Dallas' 40 on consecutive possessions — once because of a failed onside kick, once because cornerback Josh Norman caused one of the two fumbles by Dallas rookie running back Ezekiel Elliott — but settled for a field goal each time.

Still, Washington led 23-20 and appeared on its way to adding to the margin after Cousins began a drive by completing a 57-yard pass to rookie Josh Doctson. But on third-and-goal at the 6 with 10 1/2 minutes left, Cousins put the ball right in Church's gut.

Garcon stomped his foot coming off the field. Redskins right tackle Morgan Moses threw his helmet on the sideline.

"Everybody thinks we're in the morgue or something. We're not dead, by no means." — Norman on Washington's 0-2 start.

One big question entering the game was whether Norman would be assigned to cover Cowboys WR Dez Bryant no matter where the receiver lined up — or stick to one side of the field, as the $75 million defensive back primarily did in Week 1, when he stayed on the left side regardless of where Steelers WR Antonio Brown was. The answer: Norman mainly remained on the left side of Washington's defense, often leaving CB Bashaud Breeland on Bryant, early on, but eventually started to "travel" to where Bryant was.

After getting only one catch for 8 yards in Week 1, Bryant had seven catches for 102 yards Sunday.

On third-and-7 from Dallas' 37 on Washington's opening possession, Cousins had Crowder wide open and behind the defense for what should have been an easy-as-can-be TD. But Cousins overthrew the second-year receiver, and that bad miss ended the drive, because coach Jay Gruden chose to punt.

Redskins: NT Kedric Golston injured his right hamstring on the first play from scrimmage, eventually was driven toward the locker room on a cart and did not return. Ziggy Hood took over at nose tackle.