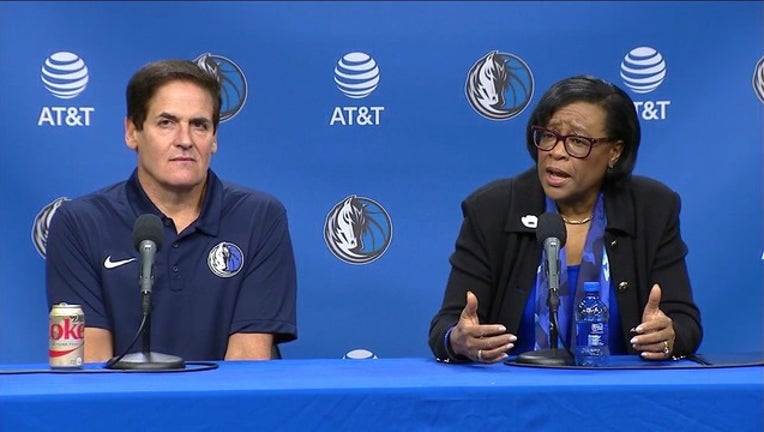 DALLAS - Dallas Mavericks owner Mark Cuban announced Wednesday he will contribute $10 million to help further the cause of women in sports and raise awareness about domestic violence after an investigation substantiated numerous incidents of sexual harassment and improper workplace conduct within the franchise going back more than 20 years.

The investigation faulted the Mavericks for allowing an environment where workplace misconduct was rampant.

"The findings of the independent investigation are disturbing and heartbreaking and no employee in the NBA, or any workplace for that matter, should be subject to the type of working environment described in the report," Commissioner Adam Silver said. "While nothing will undo the harm caused by a select few former employees of the Mavericks, the workplace reforms and the $10 million that Mark has agreed to contribute are important steps toward rectifying this past behavior and shining a light on a pervasive societal failing."

The NBA also said it would require staffing, reporting and policy changes for the Mavericks seven months after a Sports Illustrated report detailed years of examples of a hostile workplace for women on the business side of the team. There were also allegations of sexual misconduct against former team President Terdemy Ussery, who worked for Cuban for 15 years and was investigated by the Mavericks over similar allegations in 1998, two years before Cuban bought the team.

Soon after the SI report, Cuban hired former AT&T executive Cynthia Marshall as CEO. The NBA made note of that and other staffing changes the Mavericks had already implemented.

The NBA largely deferred to the investigation, which determined there was no evidence Cuban was aware one of the probe's key findings that expanded on the SI report: Ussery allegedly engaging in improper workplace conduct with 15 female employees, including touching and forcible kissing.

According to the report, a former ticket sales employee viewed and shared pornographic images and videos at work and made unwanted sexual advances toward co-workers.

The Mavericks made a "significant error in judgment" in allowing former team website writer Earl Sneed to keep his job despite his involvement in two domestic violence cases, the report said. Sneed was fired after the SI report.

An advisory group that will include Cuban, Marshall and representatives from the NBA will determine where the $10 million will go. It is earmarked for groups committed the leadership and development of women in the sports industry and combating domestic violence. By rule, the maximum fine allowed by the NBA is $2.5 million.

When the SI report came out, Ussery was three years removed from his time with the Mavericks. He had previously served as commissioner of the old Continental Basketball Association and was praised by former NBA Commissioner David Stern. Ussery left the Mavericks for the sports shoes and clothing company Under Armour but was gone from that job in less than six months. He denied the allegations when the SI report came out.