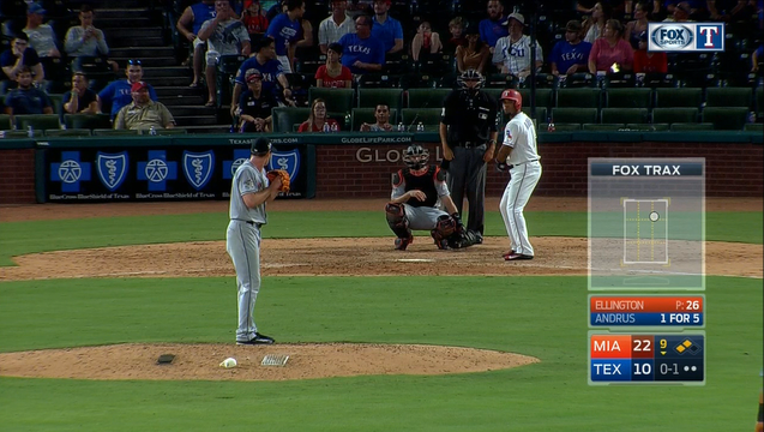 ARLINGTON, Texas (AP) - Dee Gordon homered on the first pitch of the game, and the Miami Marlins kept piling on against Yu Darvish and the Texas Rangers.

Darvish allowed a career-worst 10 runs, and Miami added plenty more runs after that - including a 468-foot blast for Giancarlo Stanton's majors-best 33rd homer in the eighth. The Marlins set a franchise record in a 22-10 victory Wednesday night.

"It's one of those games that happens every so often," Marlins manager Don Mattingly said. "They actually become hard games to play, trying to preserve arms and not embarrass anybody."

With trade speculation swirling about Darvish, the right-hander from Japan had the worst start of his five seasons with Texas. And Adrian Beltre, closing in on 3,000 hits, got ejected from the game while on deck in the eighth.

Beltre homered and had two doubles, giving the Rangers third baseman 2,996 hits before the strange call that ended his night.

When second-base umpire and crew chief Gerry Davis motioned for Beltre to get closer to the on-deck circle, Beltre instead dragged the large plastic mat marking the circle closer to him. Manager Jeff Banister also got tossed after coming out to argue the decision.

Beltre, who is in his 20th major league season, was standing where he does almost every time while waiting to hit. And near where many other players routinely stand.

"I tell Gerry I have no problem, but I didn't want to get hit. I've been hit standing over there. He said I don't care and you need to be on top of the mat," Beltre said. "I wasn't being funny. He told me to stand on the mat so I pulled the mat where I was. ... I actually did what he told me."

Drew Steckenrider, the Marlins pitcher at the time, said he didn't complain to the umpires and called it one of the funniest things he's ever seen on a baseball field.

"Standing in the same spot that he's stood for as long as I've been here. ... Look liked to me that they crew chief didn't want him standing there anymore," Banister said. "The man's chasing 3,000, our fans stuck around to see that last at-bat, they didn't get to see it."

Christian Yelich also hit a solo homer in the first for the Marlins, and Marcell Ozuna's three-run triple in the fourth made it 9-1 to chase Darvish (6-9), whose miserable outing came in his last start before Monday's non-waiver trade deadline.

Yelich finished 4 for 5 with a homer and three doubles, a night after homering with two doubles. The Marlins had 22 hits, and their last four runs came in the ninth when backup catcher Brett Nicholas pitched for Texas - including a 45 mph pitch that Ichiro Suzuki hit for a single.

Beltre went deep to start the Texas fourth against Jose Urena (9-4), who allowed five runs with five strikeouts and four walks while pitching into the sixth.

Miami sent 13 batters to the plate and scored nine times in the top of the fourth that took more than a half-hour to play. J.T. Realmuto greeted reliever Jeremy Jeffress with a two-run homer that scored Ozuna, the last batter faced by Darvish, whose five consecutive losses over his last eight starts mark the longest losing streak in his career.

"The first three innings, I actually felt pretty good. I thought I had the stuff to do it with. I got to the fourth inning and I couldn't locate my pitches," Darvish said through his interpreter, also insisting that he wasn't thinking about the trade rumors while on the mound. "I was able to focus on just today's game."

Rangers: C Robinson Chirinos, out since spraining his left ankle in a collision at the plate Sunday, said he felt good after he did some catching drills and ran some before the game.

Marlins: LHP Chris O'Grady (1-1, 5.40 ERA) is scheduled to make his fourth career start, and his second in a row against the Reds. He got a no decision in Cincinnati on Saturday.

Rangers: Before a weekend series at home against Baltimore, the Rangers have a day off Thursday.