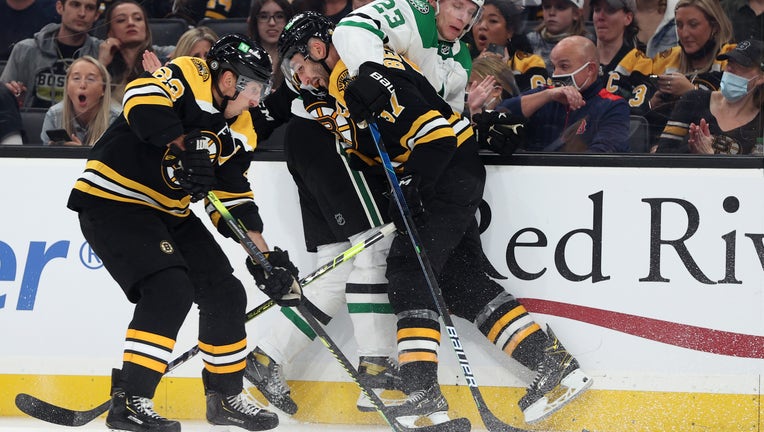 BOSTON, MASSACHUSETTS - OCTOBER 16: Patrice Bergeron #37 of the Boston Bruins checks Esa Lindell #23 of the Dallas Stars into the boards during the third period of the Bruins home opener at TD Garden on October 16, 2021 in Boston, Massachusetts. (Pho

BOSTON (AP) - Brad Marchand scored twice, Jake DeBrusk broke a 1-all tie early in the third period and the Boston Bruins opened the season with a 3-1 win over the Dallas Stars on Saturday night.

Marchand scored on a penalty shot in the first period and added an empty-netter with 1:37 left to play. Nick Foligno, Erik Haula and David Pastrnak each had assists and Jeremy Swayman stopped 27 shots for the Bruins, who never trailed.

Luke Glendening scored for Dallas and Braden Holtby kept the Stars close with 37 saves. Boston had the first nine shots of the game and finished with a 40-28 advantage, keeping the Stars close despite the volume of shots coming his way.

DeBrusk put Boston up 2-1 on a goal 4:43 into the third period, grabbing the puck in front of the crease after Nick Foligno lost control and poking it past Holtby.

Dallas didn't get a shot on net until 4:02 remained in the first, when Swayman easily handled a wrist shot by Jamie Benn to preserve the scoreless tie. Less than two minutes later, Marchand swooped in for a turnover just outside the Dallas zone and skated in on Holtby, drawing a penalty shot when Ryan Suter grabbed his stick.

Marchand gathered the puck at center ice went full speed toward Holtby, beating him with a low wrist shot on the stick side for a 1-0 lead. There was some question over whether Pastrnak cleared the zone in time before Marchand took the puck back in but the call stood, as did Boston’s 1-0 lead.

The Bruins nearly added another goal right away after a faceoff win, but Holtby got his right pad extended enough to block any rebounds during a scrum in front of the net.

Glendening evened the score on a wrist shot from the slot 9:15 into the second period. Dallas responded with a stronger second period, still only getting seven shots but holding Boston to just 11.

Swayman stopped Glendening on a short-handed breakaway with 7:20 left in the second. Although Dallas showed a little more life offensively in the second, Swayman was solid and gave up very few rebounds.

The Bruins opened the season with Swayman in net as Tuukka Rask remains unsigned and recovering from an operation in July on his right hip. An unrestricted free agent who has played all 14 of his NHL seasons with Boston, Rask has said he’d like to re-sign with the Bruins and hopes to be healthy enough to play around the holidays.

Swayman made his NHL debut in April and went 7-3 with two shutouts last season.

Boston also opens the season without forward David Krejci, who spent 15 seasons with the club before returning to play in his home country of the Czech Republic.

NOTES: Dallas went nearly the first 16 minutes without a shot on net. ... Before Marchand’s first goal, the loudest cheer of the first period came when the video monitor above center ice switched to highlights of the AL Championship Series in Houston, where the Red Sox hit grand slams in each of the two innings of a 9-5 win to even the series at 1-1. ... Dallas LW Roope Hintz was helped to the locker room after getting a cut to his face while down on the ice in front of his own late in the first period. Hintz was back with the Stars on the bench for the start of the second.

Bruins: At Philadelphia on Wednesday night.