Dallas Mavericks win Game 6, advance to second round of playoffs

The Dallas Mavs are moving on to the second round of the NBA playoffs for the first time in a long time. Mike Doocy shares the highlights and reactions.

SALT LAKE CITY - Luke Doncic believes he can score on anyone. To advance to the second round of the playoffs for the first time, he had to trust his teammates.

After previous postseasons filled with individual highlights, Doncic shared the ball and the Dallas Mavericks slipped past the Utah Jazz.

"I like sharing the ball. If they’re going to hit or blitz me, someone is going to be open," Doncic said.

Doncic and Jalen Brunson each scored 24 points and the Mavericks beat the Jazz 98-96 on Thursday night in Game 6 to wrap up the first-round series.

"It was all about trust," Dallas coach Jason Kidd said. "Luka did an incredible job knowing they were going to try and take the ball out of his hands."

After Brunson hit a 3-pointer from the corner, Mike Conley was called for traveling with five seconds remaining, and Brunson made one of two free throws with 4.3 seconds to play.

"Playing with Luka the past couple years, I should expect the ball when I’m not expecting it. The ball found me," Brunson said of his clutch 3-pointer. 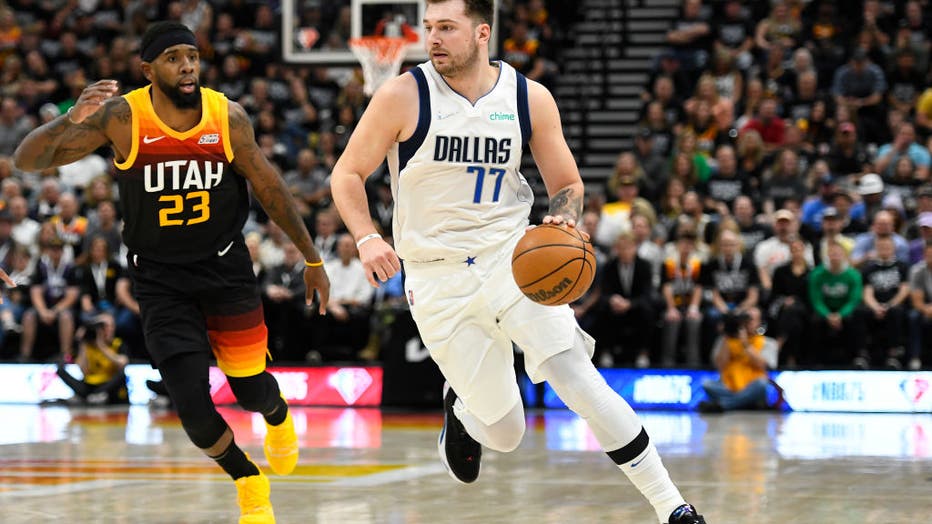 SALT LAKE CITY, UTAH - APRIL 28: Luka Doncic #77 of the Dallas Mavericks drives past Royce O'Neale #23 of the Utah Jazz during the first half of Game 6 of the Western Conference First Round Playoffs at Vivint Smart Home Arena on April 28, 2022 in Sal

The Jazz got an open look for Bojan Bogdanovic on the left wing on the final play, but he came up short and the Mavericks moved on to face top-seeded Phoenix in the second round.

"Bogey don’t miss a lot of those. My heart stopped. It felt like that shot was 15 seconds in the air," said Doncic, who had nine rebounds, eight assists, two blocks and two steals.

Spencer Dinwiddie added 19 points, and Dorian Finney-Smith had a playoff career high of 18 points as the Mavericks finally got the "monkey off their back," as Kidd put it.

The Mavericks won in the first round for the first time since winning the 2011 NBA championship.

"We have played a lot of games in the playoffs and still haven’t got to the second round. But we feel like we can do something great this year, so we all expected to get this win," Finney-Smith said.

"I’m speechless," Mitchell said about failing to advance. "It’s on me. I put a lot pressure on myself, but I just wasn’t who I needed to be. I need to be better."

Bogdanovic finished with 19 points, but couldn’t the make the shot that would have won it.

"Obviously, Bojan is as clutch a player there is. You see him hit big shot after big shot," Utah coach Quin Snyder said. "I think everybody in the locker room would want him to have that shot."

"There’s no excuse. I needed to hit that shot to force Game 7," he said.

Earlier in the fourth quarter, Finney-Smith’s 3-pointer gave the Mavericks their largest lead at 88-80 before the Jazz scored eight straight — many coming off hustle plays as Utah played with desperation — culminating with a Mitchell-to-Rudy Gobert dunk.

The Mavericks found their range in the third quarter as the Jazz tried multiple defenses but somehow seemed to consistently leave someone alone behind the arc. Doncic had 10 points and Dallas made 8 of 12 from 3-point range to outscore Utah 36-19 in the third quarter.

"For guys like me, that’s when I start smiling," Finney-Smith said about the ball movement to start the second half. "That’s when we get our spot-up shots. Luka causes so much pressure and then he finds guys."

The Mavericks shot 56% (14 of 25) from 3-point range after halftime, but several Dallas players credited their defense for the win.

Despite a height disadvantage and the fact that Utah had the NBA’s most-efficient offense in the regular season, Dallas held the Jazz to just 99 points per game in the series.

Eleven years ago on the same date, Kidd was on the Dallas team that beat the Portland Trail Blazers and moved to the second round.

"You make me feel old. It was a long time ago we won in Portland, and I just remember a lot of people didn’t think we were going to get out of the first round," Kidd said.

The former point guard said this Dallas team is a special group, like the 2011 champions.

"These guys aren’t very big, but they find a way to win and they have fun doing it," Kidd said.

BRUNSON PROVES TO BE KEY

Jalen Brunson averaged 27.8 points in the series and kept the Mavericks ahead of the Jazz, including a 41-point game in Game 2, until Doncic returned from a calf injury.

"We got everything we could out of JB. To start the series without Luka and have JB and Spencer carry us until he got back and then make to switch to play with Luka. He was really big for us," Kidd said.

Mavericks: Dallas missed all 10 3-point attempts in the first quarter. "Our shoulders were up by our ears we were so tense," Kidd said. The teams combined to start 1 for 17 from beyond the arc. … The Mavericks shot 11 free throws, a series low. … Dallas again had single-digit turnovers, with nine.

Jazz: Conley had eight assists by halftime, but none in the second half. … Utah outrebounded Dallas 48-37. … Utah assistant coach Keyon Dooling was placed on administrative leave on Wednesday after being added to a fraud case concerning the league’s health and welfare benefit plan.

The Mavericks and Suns will open the second round Monday night in Phoenix.