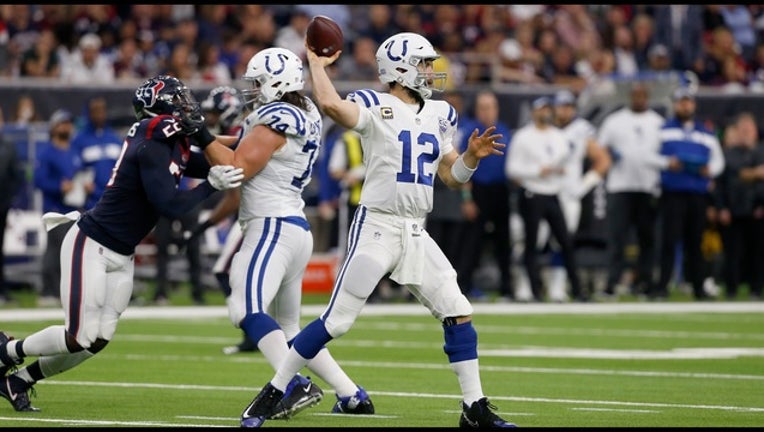 Andrew Luck #12 of the Indianapolis Colts throws the ball pressured by Whitney Mercilus #59 of the Houston Texans in the second quarter during the Wild Card Round at NRG Stadium on January 5, 2019 in Houston, Texas. (Photo by Bob Levey/Getty Images)

HOUSTON (AP) - Andrew Luck threw for 222 yards and two touchdowns and the Indianapolis Colts raced out to a big lead and cruised to a 21-7 win over the Houston Texans in the wild-card game on Saturday.

Luck put on a show in his hometown, throwing for 191 yards and two touchdowns before halftime to help the Colts (11-6) build a 21-0 lead.

Indianapolis advances to face the top-seeded Kansas City Chiefs in the divisional round next weekend.

Houston (11-6), which overcame a 0-3 start to win the AFC South, gave up too many big plays and couldn't get anything going on offense in the first half to fall into the huge hole.

Deshaun Watson, who was sacked an NFL-leading 62 times in the regular season, was sacked three times and hit eight more times in a disappointing playoff debut. He finished with 235 yards passing with a touchdown and an interception.