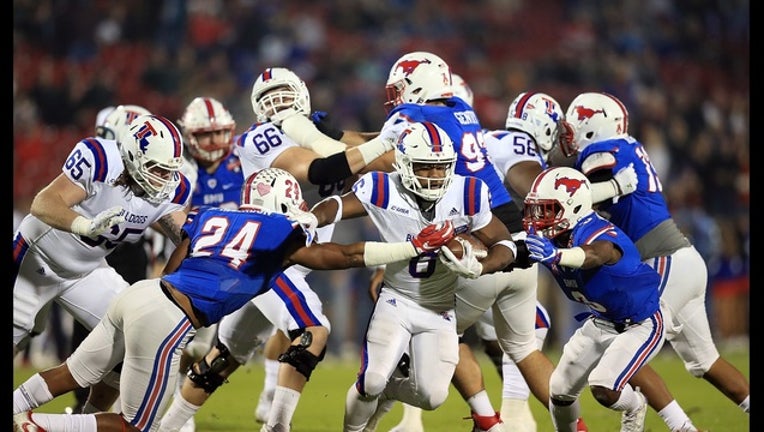 Boston Scott of Louisiana Tech runs the ball against Delano Robinson and Cedric Lancaster of SMU in the first quarter during the 2017 DXL Frisco Bowl on December 20, 2017 in Frisco, Texas. (Photo by Ronald Martinez/Getty Images)

FRISCO, Texas (AP) - J'mar Smith threw three touchdown passes and ran for a score, Louisiana Tech's defense scored twice and the Bulldogs rolled to a 51-10 victory over sloppy SMU on Wednesday night in the Frisco Bowl.

SMU (7-6) fumbled on its first offensive snap and turned it over on its first three drives and six times overall.

It was a disappointing debut for SMU coach Sonny Dykes against his former school. Dykes was 22-15 at Louisiana Tech from 2010 to 2012 before leaving for California in 2013. Dykes was fired by Cal a year ago, and spent this season as an offensive analyst at TCU before SMU hired him to replace Chad Morris on Dec. 11.

With most of the staff joining Morris at Arkansas, Dykes elected to coach the bowl game and installed graduate assistant G.J. Kinne as offensive coordinator for the bowl game.

It didn't have the desired effect.

Smith gave the Bulldogs a 7-0 lead on a 1-yard sneak with 7:43 remaining in the first quarter. Louisiana Tech had a short field to work with after Secdrick Cooper returned an interception 31 yards to the SMU 30.

Amik Robertson returned an interception 55 yards for a touchdown less than a minute later, pushing the lead to 14-0.

SMU held onto the ball on it's fourth drive, but couldn't reach the end zone and settled for a field goal after stalling at 8.

On the ensuing kickoff, Jaqwis Dancy had a 65-yard return, setting up a 6-yard touchdown pass from Smith to Veal for a 21-3 lead.

Louisiana Tech added returned another interception for a touchdown early in the second quarter. This time, Darryl Lewis had a 23-yard return down the sideline for a 28-3 lead.

Trey Quinn scored SMU's touchdown on a on a nine-yard pass late in the second quarter. SMU quarterback Ben Hicks completed 19 of 33 passes for 127 yards.

Louisiana Tech: The Bulldogs have won four straight bowl games and scored at least 47 points in their past. Three of those four bowl victories have come in the state of Texas.